Biden Administration Should Look in Mirror Before Casting Stones Over Vaccinations 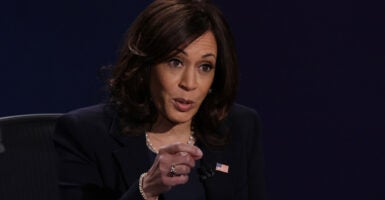 In a nationally televised debate on Oct. 7, 2021, then-vice presidential candidate Kamala Harris shamefully said she would take a COVID-19 vaccine if doctors said it was safe but not if then-President Donald Trump said to take it. (Photo: Alex Wong/Getty Images)

It was always going to be a Herculean task to inoculate, with an untried vaccine, a multiethnic nation of 330 million people across a vast continent—in an era when the media routinely warps the daily news.

Many African Americans understandably harbored distrust of government inoculations after the infamous Tuskegee experiment. Nearly 40 million foreign residents in America were born in other countries, many of which have corrupt governments that long ago lost the trust of the population.

The anti-vaccination movement was distrustful of what the government said was safe, given the rush to produce previously untried mRNA inoculations. Rural and inner-city poor are sometimes not so easily reached, much less persuaded.

Yet politics played the most obstructive role early on. Candidate Joe Biden talked grandly of reviving the World War II war production board. He deliberately omitted the fact that it was Donald Trump who emulated FDR’s mobilization of private enterprise under government auspices.

Trump offered legal protections for companies to accelerate their research and development in hopes that competition, profits, and public oversight would result in COVID-19 vaccinations less than a year after the pandemic hit.

And it worked. Mostly safe and effective vaccinations were rolled out not long after the election. Some 17 million were inoculated by the time of Biden’s Jan. 20 inauguration.

Yet Dr. Anthony Fauci, in the days when he still posed as a bipartisan professional, had dismissed the idea of any viable vaccination in the election year 2020. Biden publicly doubted that Trump’s vaccination efforts would either work or be safe.

In a nationally televised debate, vice presidential candidate Kamala Harris shamefully said she would take a COVID-19 vaccine if doctors said it was safe but not if Trump said to take it. That was disastrous messaging for an already skeptical nation.

Pfizer had promised a breakthrough vaccination announcement in late October, on the eve of the election. Then it mysteriously went silent—only to suddenly announce its successful vaccine less than a week after Election Day.

Biden continued the politicization of the vaccination program by bizarrely and falsely declaring on CNN that there had been no vaccines available until he entered office. Yet Biden himself was vaccinated on Dec. 21 on live television.

Soon, Biden grandly promised that everyone who was vaccinated would be safe from COVID-19 and could thus resume normal life. Those who refused vaccinations were almost immediately labeled by the media as Trump supporters, reviving the left’s narrative of uneducated, idiotic, and white resistance to government.

The truth was that, apart from Asian Americans, whites were the most highly vaccinated of the population. Elites charged that backward Southern states like Alabama and Mississippi were not just lagging in their vaccination rates but endangering vaccinated Americans by resuscitating a constantly mutating virus. In truth, a low vaccination rate among African Americans in the South was among the chief reasons for that region’s lower vaccination rates.

Once the delta variant arrived in force in early summer, earlier government assurances that the vaccinated were now free to resume a normal life lost credibility. Confused and mixed messages followed—simultaneously downplaying and exaggerating the efficacy of the vaccinations.

Those who were vaccinated were assured that they would not become seriously ill from COVID-19, would likely not need hospitalization, and almost certainly would not die from it.

No matter. The media and government officials blame-gamed unvaccinated “superspreaders” for infecting those already vaccinated—as if the more than 100 million Americans 12 and older still not fully vaccinated were red-state rubes who packed honky-tonk bars and motorcycle rallies.

Yet the reality was quite different.

Last summer, more than 1,000 medical professionals signed a letter saying that Black Lives Matter protests shouldn’t be shut down due to virus concerns, dangerously encouraging people to mass in the streets to demonstrate.

Reports indicate that the U.S. is on pace to encounter more than 2 million migrants at the southern border by the end of the fiscal year—people with legal impunity but without vaccinations, COVID-19 tests, or lectures from Washington.

A recent breakout of COVID-19 among even the vaccinated in Provincetown, Massachusetts, was not due to alt-right Neanderthals. It was largely attributable to the annual gay pride celebrations, with thousands of partiers swarming bars, clubs, restaurants, and hotels.

Former President Barack Obama was reportedly scheduled to have 500 guests and 200 staffers at his Martha’s Vineyard estate at a time when the government was again recommending that masks be worn almost everywhere.

If the Biden administration cannot vaccinate 70% of America or assure vaccinated Americans that COVID-19 mutations won’t seriously harm them or rekindle the pandemic, then it might first look in the mirror before casting stones at others.