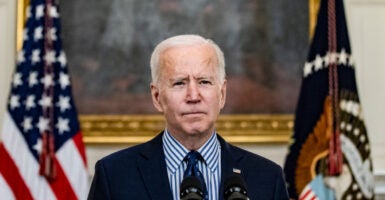 President Joe Biden speaks from the State Dining Room following the passage of the American Rescue Plan in the U.S. Senate at the White House March 6, 2021, in Washington, D.C. (Photo: Samuel Corum/Stringer/Getty Images)

Back in 1994, a worried Delaware taxpayer sent a message to his senator. “Please don’t force me to pay for abortions against my conscience,” he said.

“I will continue to abide by the same principle that has guided me throughout my 21 years in the Senate: those of us who are opposed to abortion should not be compelled to pay for them,” he wrote.

“As you may know,” Biden continued, “I have consistently—on no fewer than 50 occasions—voted against federal funding of abortions.”

“[T]he government,” Biden said, “should not tell those with strong convictions against abortion, such as you and I, that we must pay for them.”

Today, Biden is the most powerful man in the United States government—and he is demanding that Americans “with strong convictions against abortion” must pay for them with their tax dollars.

This is the moral price Biden was willing to pay to become vice president and then president as the nominee of a party that will not tolerate leaders who insist on defending the innocent unborn.

When Biden ran for president in 2020, he made clear on his campaign website that he favored not only nationwide abortion on demand but also federal funding of it.

“Vice President Biden favors repealing the Hyde Amendment,” his website said. This is the amendment Congress has habitually added to annual appropriations bills over more than four decades to prohibit funding of abortions except in cases of rape, incest or when the life of the mother is endangered.

“Biden will work to codify Roe v. Wade,” said his website, “and his Justice Department will do everything in its power to stop the rash of state laws that so blatantly violate Roe v. Wade.”

Roe, of course, is the 1973 Supreme Court decision that declared abortion a “right.”

When Biden’s $1.9 trillion COVID-19 bill—the so-called American Rescue Plan—was being considered in the House, Reps. Jackie Walorski, R-Ind.; Cathy McMorris Rodgers, R-Wash.; and Virginia Foxx, R-N.C., offered a Hyde-type amendment to prevent it from funding abortions. This amendment was co-sponsored by 203 of their colleagues.

“Without Hyde protections in the reconciliation package, over $414 billion in taxpayer dollars could potentially be used to pay for elective abortions or plans that cover elective abortions,” said a statement from Walorski’s office.

Rep. Chris Smith, R-N.J., co-chair of the Bipartisan Congressional Pro-Life Caucus, then noted in the House debate on the bill how Biden had flip-flopped on federal funding of abortion. Smith demonstrated this point by quoting from and linking to the letter Biden had written to his constituent in 1994 and a similar letter Biden had authored in 1977.

“Mr. Biden once wrote to constituents explaining his support for laws against funding for abortion by saying it would ‘protect both the woman and her unborn child,'” Smith said.

But Biden no longer agrees with himself.

At the White House press briefing on Feb. 16, Owen Jensen of EWTN asked Biden press secretary Jen Psaki: “We know where President Biden stands on the Hyde Amendment, but that being said, can this administration right now guarantee, if the American Rescue Plan is passed, that no taxpayer dollars will go to the abortion industry?”

“Well, the president’s view of the Hyde Amendment is well known, as you have stated in your question,” Psaki responded in part of her answer.

“He’s shared his view on the Hyde Amendment,” she went on to say. “I don’t think I have anything new for you.”

Jensen pressed her for a direct answer. “Can the administration guarantee those tax dollars won’t be used for abortions?” he asked.

“Well, I think, Owen, as I’ve just noted,” she responded, “three-quarters of the public supports the components of the package, wants to see the pandemic get under control, wants to see people put back to work, vaccines in arms. So, I think that answers your question.”

Psaki would not directly state the plain truth: Yes, Biden’s COVID-19 bill will use tax dollars to pay for abortions.

But she could not deny it—because it does.

When the bill came up in the Senate on Friday, Sen. James Lankford, R-Okla., (for whom this writer’s daughter works) offered a Hyde-type amendment to prevent it from funding abortion. As a procedural matter, the amendment needed 60 votes. It won only 52.

Thus, the Senate version of the bill funds abortion, too.

As the Senate was considering it, Archbishop Jose Gomez of Los Angeles, the president of the U.S. Conference of Catholic Bishops, joined eight other leading bishops in issuing a statement.

“For 45 years, the United States Congress—whether controlled by Democrats or Republicans—has maintained that taxpayers should not be forced against their conscience to pay for abortions,” these bishops said.

“We ask all Members of Congress to include the same protections against abortion funding that have been present in every COVID relief bill to date, and every annual spending bill for almost half a century,” they said.

Biden, this nation’s second Catholic president, is now poised to sign a bill that defies this request and forces all American taxpayers to pay for abortions.