Sen. Marsha Blackburn on Why $1.9 Trillion in COVID-19 ‘Relief’ Isn’t That 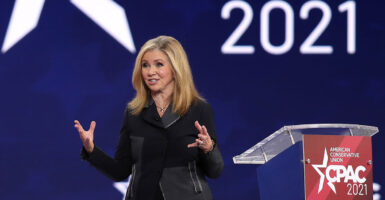 Sen. Marsha Blackburn, R-Tenn., says Democrats’ $1.9 trillion COVID-19 bill, among other things, has “only about 10%” that actually deals with the pandemic while providing “$350 billion to bail out the blue states.”

Blackburn, today’s guest on “The Daily Signal Podcast,” also says that House Speaker Nancy Pelosi “wants $112 million for the Bay Area Rapid Transit, so that people can get from San Francisco to Silicon Valley to work on all of those six-figure jobs.”

Why are Democrats pushing for these provisions in COVID-19 “relief”? Blackburn discusses this and more.

Sen. Marsha Blackburn: And I am always delighted to join you all. Thank you so much.

Del Guidice: Well, thanks for being with us. I wanted to start off talking to you about Democrats’ $1.9 trillion COVID-19 bill. There’s a lot in here. Can you just tell us about the bill and how much of it really does relate to COVID-19?

Blackburn: What we’re hearing is there’s only about 10% of the bill that actually deals with COVID. And the other components that are in the bill, there’s $350 billion to bail out the blue states, $50 billion of it—believe it or not—goes to New York. New York has been so poorly managed through the past several decades.

Then you look at $27 billion going to California. California actually has a surplus in their budget this year, but they’ve mismanaged all their pensions.

[House Speaker] Nancy Pelosi wants $112 million for the Bay Area Rapid Transit, so that people can get from San Francisco to Silicon Valley to work on all of those six-figure jobs.

You can look at what they’re doing for arts and museums, $150 billion there. We know that art centers and museums have been closed during COVID. So there is a tremendous amount of waste.

Del Guidice: … Is there anything really related to COVID [in this bill]? I feel like there’s like one or two things, but how much of this is actually COVID?

Blackburn: Yeah. Well, it’s so interesting because there’s the [Paycheck Protection Program] money, the plus-up in unemployment, and then a few billion dollars for vaccine production and distribution that is in the bill.

But thank goodness President [Donald] Trump created Operation Warp Speed, and we have a vaccine and we are getting shots in arms, and people are completing their shots and their vaccinations and now they’re beginning to get back to life as normal.

Del Guidice: I want to ask you too, coming from Tennessee and all the small businesses you work with and see and talk to you there, how has this shutdown impacted the people of Tennessee?

Blackburn: The shutdown has been very difficult for many of our small businesses, especially restaurants and entertainment venues. They were the first to be shut down, they’re going to be the last to be able to open up. So those sectors of our economy have been incredibly hard hit.

So when Tennesseans hear what the Democrats are doing with their spending bill—giving all this money to blue states, giving money to individuals that haven’t missed a paycheck—they are just stumped with why they would even do this.

COVID relief is supposed to be targeted timely and temporary and that is what people want to see. They don’t want to burden their children with having all of these big tax bills that will come their way in another decade.

Del Guidice: Something else that’s been a big topic of debate is kids going back to school, and a lot of schools … across the country are still closed. How has that impacted Tennessee children and where do you think we should go from here?

Blackburn: I have to give a shoutout, Rachel. Our Tennessee superintendent and directors of schools and our teachers and our parents said, “We are not going to be stopped by this. We’re going to find a way.” And they have.

They have had to do modified schedules. Some of them are back into school full time, others … rotate days, but children are back in school. Children are playing sports. There are activities that are taking place and they put the money that was in the CARES Act to good use.

They bolstered their remote learning opportunities and their technology and took the necessary precautions to have children in school, in front of a teacher. And Tennessee is doing great with this.

Del Guidice: Switching gears a bit here, something you’ve been talking about on Twitter is the nursing home cover-up we saw with New York Gov. Andrew Cuomo covering up a lot of deaths. I think it was around 15,000 that happened in nursing homes in that state.

So what’s your thoughts there? You’ve talked about it on Twitter, so I’m just curious to hear something. This has happened and people are just starting to see and react to it now.

Blackburn: One of the things that has so offended people is the bluster that came from Gov. Cuomo during COVID and no one has yet figured out why he made the decision to send people back to nursing homes when he had the Mercy Ship, when he also had the arena that had been fitted and was ready to receive COVID patients and went unused. So there is not an understanding of why he made that decision.

Now, I think that it is just so devastating to individuals who lost loved ones and they couldn’t see them and yet he’s out here selling a book about his great leadership. He should take the proceeds from that book and pay expenses for every one of these families that lost a loved one.

Del Guidice: Well, you spoke at [the Conservative Political Action Conference], and something that you talked about is fighting for freedom of speech here in the U.S., at home, and also across the world. How should this happen and why is it important?

Del Guidice: Something else [that] was the topic of CPAC, where you spoke, and we’ve seen it surface a lot in social media and other areas, is this situation of cancel culture where people say something that Big Tech disagrees with and then they’re canceled.

We’ve seen Former President Donald Trump, his Twitter was taken down. And then other organizations like the Job Creators Network, for example, they’re just an organization that is for lower taxes and helping people in their different communities, in jobs situations, and their account was taken down.

So what’s your perspective of cancel culture and how do you think this challenge or the situation should be met?

Blackburn: Rachel, I think that we have Big Tech, Big Media, and big leftists who are all in this together. And people are going to have to push back on this and then there is legislation, some things that we should do.

I have the “virtual you” protection agenda, which is my online privacy bill, which would put the individual in control of their presence online and give you the ability to say to Big Tech, “No, you cannot follow me, track me, data mine me, sell or share my information without me allowing you to do so.

And for Section 230 in censorship, basically what it says is: “Look, you, Big Tech, are going to have to go over here and come out from behind these liability protections. We’re going to save these for new entrants and smaller players in the social media space. And if you want to censor somebody or block or throttle or demonetize or deplatform, guess what? You’ve got to tell them specifically why before you take an action.”

Del Guidice: As we wrap-up, I wanted to ask you just about your perspective on the current climate we’ve seen right now. It’s a heightened time, definitely, with all the different things going on at the Capitol and all the barbed wire and everything going on, and you spend a lot of time serving in the House and then now you’re in the Senate.

So given everything you’ve been able to see all these years in public service—I was actually at your victory party, I think it was almost two years ago now, which is bizarre to think about—what is your thought on where we’re at and where do you think we need to go because we have a lot of work to do?

Blackburn: We do have a lot of work to do. And when you look at how things have transpired and how given the left is to taking away freedoms and rights and giving power to the government for government to have control over your life, my hope is that this 2020 election cycle will show people that the left really means business on this and they are not going to give up. So if you like your freedom, you better be willing to fight for it.

Del Guidice: Well, that’s a great note to end on. Sen. Blackburn, thank you so much for joining us on “The Daily Signal Podcast.” It’s always great having you with us.