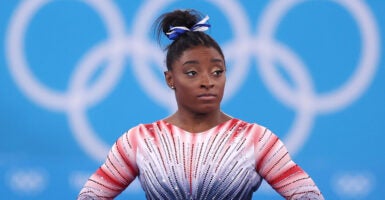 Whether or not we understand Olympic gymnast Simone Biles' situation, we should have compassion for whatever she’s going through. Pictured: Biles warms up Tuesday before the Women's Balance Beam Final at Ariake during the Tokyo Olympics. (Photo: Jamie Squire/Getty Images)

First, Biles’ decision was attributed to her mental health and well-being. (Recall: She felt enormous pressure as the “head star of the Olympics,” and has a painful backstory as one of Larry Nassar’s 500 victims.)

Then, the decision was because Biles wanted the Olympics “to be for myself,” but she felt like “I was still doing it for other people.”

Then, it was because of her physical safety: She got the “twisties”—a gymnastic phenomenon where your body and mind do not connect.

Finally, we learned Wednesday of a tragic event that also influenced her decision: Her aunt unexpectedly died.

“At the end of the day, people don’t understand what we are going through,” Biles said. “Two days ago, I woke up and my aunt unexpectedly passed, and it wasn’t any easier being here at the Olympic Games.”

She’s right: People don’t understand what she’s going through, nor do we know much else about her aunt’s death. But we do know that experiencing a tragedy like that miles from home, away from family, in the midst of a pandemic and Olympic competition, must have been tremendously hard.

“People have to realize that, at the end of the day, we’re humans, we’re not just entertainment,” Biles said. “There are things going on behind the scenes that people have no idea about.”

Although it’s tempting to want a clear answer on why exactly Biles dropped out, we shouldn’t be surprised by the murkiness surrounding her decision.

The truth is always more complicated than it seems. Mentally, physically, and emotionally, Biles had a lot on her plate. It would have been challenging for anyone to deal with, let alone a 24-year-old in another country, mostly by herself.

Whether we understand parts of her situation or not, we should have sympathy and compassion for whatever she’s going through. We also should accept that the decision she made to withdraw was the right one—for both her country and her team.

If Biles had continued to compete with her head in the wrong place or her body out of sync, Team USA might not have brought home silver. Worse, she could’ve gotten hurt.

However, while she rightly has earned her title in gymnastics as the GOAT (greatest of all time), we don’t have to pretend that in this instance she was the GOAT.

Her actions over the past two weeks made her admirable for different reasons—perhaps more important reasons—but helping her country bring home gold wasn’t among them.

While Americans love to win, we also know that life is about more than trophies and gold medals. In that regard, Biles reminded us of an important lesson. For that, she is a national treasure.

But acknowledging that teaching us that lesson wasn’t what we sent her to Tokyo for doesn’t make you a horrible person.

Feeling disappointed that Team USA lost to Russia doesn’t make you selfish. If anything, it makes you human. A patriotic one, at that.

As humans, it’s possible for us to feel disappointed, immensely sympathetic, and deeply proud all at the same time. Like Biles, we are complicated creatures with mixed backgrounds, experiences, and emotions.

Perhaps if we all did a better job of recognizing that instead of trying to view life in black or white, we’d be more accepting of both ourselves and one another.