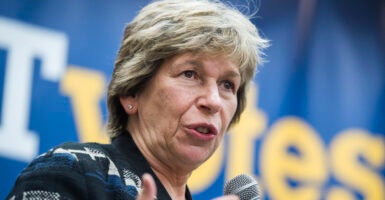 The very next day, however, Weingarten introduced a presentation by Ibram X. Kendi, the author of “How to Be an Antiracist” and a leading proponent of critical race theory ideas, at a conference about educating children.

The gaslighting is nothing if not blatant.

If you actually read Kendi’s works and the writings of other critical race theorists and self-described “anti-racists,” it’s clear that this ideology is about modern politics and political power, not history.

In his speech to the teachers, Kendi compared opponents of critical race theory to those who resisted the integration of schools in the 1960s.

Not only is that comparison outrageous, it’s also ironic, given that many woke proponents of critical race theory embrace a kind of neo-segregation.

Kendi and Weingarten, of course, lambasted laws against the teaching of critical race theory being passed in a number of states, and Weingarten even said that her union would legally support teachers who defy those laws.

It should be clear from that that public school teachers unions are a huge reason why critical race theory is showing up in classrooms across the country.

Despite the blatantly dishonest denial by Weingarten, the American Federation of Teachers and other teachers unions have been explicit about trying to inject critical race theory into K-12 curriculums and teacher trainings.

The National Education Association, another teachers union and the largest public sector union in the country, recently issued a directive to bring critical race theory to classrooms in every state in the union.

Christopher Rufo, a senior fellow at the Manhattan Institute, uncovered the directive.

The National Education Association directive states: “It is reasonable and appropriate for curriculum to be informed by academic frameworks for understanding and interpreting the impact of the past on current society, including critical race theory.”

Not only is it aimed at educating teachers to “fight back against anti-CRT rhetoric,” it also will promote “an already-created, in-depth, study that critiques empire, white supremacy, anti-Blackness, anti-Indigeneity, racism, patriarchy, cisheteropatriarchy, capitalism, ableism, anthropocentrism, and other forms of power and oppression at the intersections of our society, and that we oppose attempts to ban critical race theory and/or The 1619 Project.”

“Contrary to those who claim ‘teaching critical race theory isn’t happening in classrooms,’ as stated in a recent NBC News headline, the NEA resolution promotes the use of the doctrine in 14,000 school districts across the country,” wrote my colleague Lindsey Burke, director of The Heritage Foundation’s Center for Education Policy. (The Daily Signal is the news outlet of The Heritage Foundation.)

The union vows to carry that out by partnering with Black Lives Matter at School and the Zinn Education Project.

Black Lives Matter at School, as I explained in a review of a book that outlines the goals of the project, aims to bring Marxist and deeply racialized ideas to young children, seeks to abolish the nuclear family, and promotes defunding the police, among many other far-left priorities.

The Zinn Education Project is committed to pushing the teachings of the late Howard Zinn, a “historian” of dubious merit whose works promoted a Marxist understanding of American history.

It’s notable that the Zinn Education Project is answering Weingarten’s call to help teachers defy state laws. The organization has put together a pledge for teachers to teach critical race theory, no matter what the laws say.

More than 5,000 teachers have already signed on.

So much for respecting democracy.

NEA also put out a call to “research” and stop any person or organization trying to stop its agenda. That includes The Heritage Foundation.

Prior to its most recent summit, the American Federation of Teachers has also been active in promoting The New York Times’ historically dubious 1619 Project and has condemned the prohibition of teaching critical race theory in classrooms.

The bottom line is that any denial that there is a sweeping national push to bring critical race theory and other, similar ideologies to K-12 schools is disinformation hiding in plain sight.

If the past year is any indication, the public school teachers unions not only have enormous influence over school policies, they don’t really have the best interests of students as their top priority.

The resistance to that agenda isn’t some kind of plot or conspiracy; it’s a reaction from parents and other concerned citizens who have become aware of the radical ideas being foisted upon the next generation of Americans.

It’s coming from people who don’t want a country that slips into a kind of neo-segregationism, where young people are taught to hate their fellow Americans or themselves because of their skin color or ethnic ancestry.