Yes, It’s Ungrateful to Turn Your Back on the National Anthem 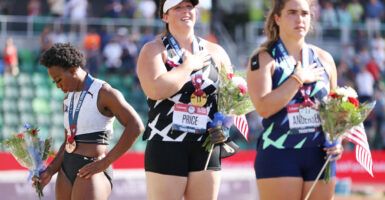 Gwen Berry, left, turns away from the U.S. flag during the U.S. national anthem as DeAnna Price, center, and Brooke Andersen also stand on the podium after the Women's Hammer Throw final on Day Nine of the 2020 U.S. Olympic Track & Field Team Trials at Hayward Field on June 26, 2021, in Eugene, Oregon. (Photo: Patrick Smith/Getty Images)

This week, heretofore nearly anonymous hammer thrower Gwen Berry made international headlines when, during the podium ceremony for winning bronze in an Olympic trial, she turned away from the United States flag as the national anthem played.

The anthem wasn’t played for her, or for the other competitors in the hammer throw; every day during the trials, a pre-scheduled anthem went out over the sound system.

Berry turned 90 degrees from the flag, stood with her hand on her hip, and glared directly into the camera. It was a deliberate provocation and a deliberate attempt to raise her own profile. “I feel like it was a setup,” she later complained, “and they did it on purpose.”

Actually, Berry just saw an opportunity to maximize her profile, and she seized it with alacrity.

In the United States, there’s far more money to be made and fame to be achieved by spurning the American flag and the national anthem than by embracing them: Colin Kaepernick makes millions because he failed as a quarterback but succeeded as a self-aggrandizing symbol of supposed racial bravery. Meanwhile, the thousands of athletes with track records superior to either Kaepernick’s or Berry’s who stand for the national anthem remain anonymous.

That’s because America currently rewards an entitled sense of grievance. Most Americans know little about foreign countries; they somehow believe that the United States is inferior, or that the prosperity, health, and free lifestyle to which they have become accustomed is the global and historic norm.

It most assuredly is not.

While Berry was protesting the national anthem, the Chinese government was busy arresting the editor of the pro-democracy Hong Kong newspaper Apple Daily. That arrest came on the heels of the arrest of one of Apple Daily’s columnists for “conspiring to collude with foreign countries or foreign forces to endanger national security.”

While Berry was protesting the national anthem, the Taliban was busy spreading like a metastasizing cancer over Afghanistan, preparing its new subjects for the tender mercies of brutal Islamist rule.

While Berry was protesting the national anthem during an event at which she threw heavy objects for sport, billions of people were living in absolute privation the world over.

None of this means that the shortcomings of America should be ignored. But to protest the flag or the national anthem as particular symbols of grievance is to demonstrate full-scale your own ignorance and ingratitude.

“I’m here to represent those who died due to systemic racism,” Berry said. But she herself is an excellent indicator of just how much promise America holds for its citizens.

She grew up in the home of her grandmother, with 13 people in the house; she had a baby out of wedlock at 15 and then earned a college scholarship. She got two jobs and helped support her extended family. Now, she’s going to the Olympics. And presumably, there, she will turn her back on the flag and the national anthem if she makes it to the podium.

In doing so, she’ll become a hero to millions. She’ll get richer; she’ll get more famous. Perhaps, like pseudo-Marxist Patrisse Cullors of Black Lives Matter, she’ll buy herself a few houses; maybe, like Kaepernick, she’ll make the cover of Sports Illustrated.

Like self-declared Marxist Cullors, who currently owns three separate houses worth over $1.5 million each, Berry is in it for the attention and the profit. Yesterday, nobody had heard of her. Today, everybody has. It’s that simple.

One thing is certain, however: Those who spend their days championing their own ingratitude at a society that gives them extraordinary opportunities—opportunities unavailable to nearly all humans for nearly all of human history, and unavailable to most people on the planet right now—aren’t likely to live happier lives. And they’re unlikely to make their nations better, either.