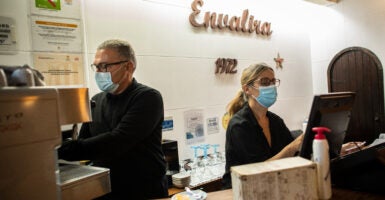 Gloria Hervella and brother-in-law Sindo Gonzalez work on Oct. 15, the final day of the Envalira restaurant being open prior to a 15-day business closure—ordered to help fight the spread of the coronavirus—in Barcelona, Spain. (Photo: David Ramos/Getty Images)

Spain has been on an economic roller-coaster ride throughout the past decade.

Economic freedom for the European Union’s fourth-largest economy has improved remarkably over the past few years. Now, however, in trying to spur economic recovery from the COVID-19 pandemic, Spain may be pushing economic freedom to the sidelines.

As documented by The Heritage Foundation’s Index of Economic Freedom, which quantifies the levels of economic freedom of 184 countries on a scale of 0 to 100, Spain made steady improvements in economic freedom in the early 2000s, but lost ground in 2017 when the country dropped five points in one year, falling below the European average.

The sharp decline was caused by poor fiscal health, unsustainable debt obligations, and a rigid labor market. Spain had an economic freedom score of only 63.6 in 2017 after an all-time high score of 70.2 six years prior.

But that’s when a Spanish comeback took hold.

Improvements in fiscal health and government integrity have increased economic freedom and simultaneously improved the lives of Spanish citizens.

This year, Spain has registered a score of 69.9, a scant one-tenth of a point away from reentering the ranks of “Mostly Free” economies.

That progress is at risk as the Spanish government tries to boost economic recovery from the COVID-19 pandemic. Finance Minister Maria Jesus Montero recently raised the budget deficit target to 8.4% of gross domestic product, indicating that Spain is trying to spend its way out of the economic downturn.

Instead of reducing the size of government, which would improve economic freedom, Spain is increasing the government’s size and scope.

That’s cause for concern.

The labor market has been struggling also. During the middle of the COVID-19 pandemic, youth unemployment in Spain reached 41.7%, the highest of any country in the European Union.

While youth unemployment is likely to fall as the country reopens and tourism increases, there are structural issues that could cause the rate to remain high, relative to other European nations. In particular, the regulatory environment encourages companies to hire temporary workers instead of full-time employees.

Relying on government spending will not.

Spain should focus on creating a labor market that incentivizes full-time employment, instead of temporary employment. Reducing government spending would allow the private sector to thrive.

Pivoting in that direction is the way to achieve greater long-term prosperity for the Spanish people.