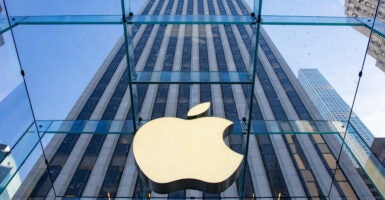 Apple bent the knee to a vocal minority of employees when it fired Antonio Garcia Martinez, a former Facebook advertising product manager, who it had just hired. Pictured: The Apple flagship retail store is a landmark on Fifth Avenue in New York City. (Photo: Nicolas Economou/NurPhoto/Getty Images)

A San Francisco Bay Area-based entrepreneur might have broken the record for the quickest cancellation in history, with Reuters reporting his firing less than 48 hours after he was hired by Apple to work on its fledging advertising program.

Like seemingly every other large company these days, Apple bent the knee to a vocal minority of employees who delight in chasing those with whom they disagree out of town when it decided to give Antonio Garcia Martinez, a former Facebook advertising product manager, the boot.

“We are deeply concerned about the recent hiring of Antonio Garcia Martinez. His misogynistic statements in his autobiography … directly oppose Apple’s commitment to Inclusion & Diversity,” wrote the woke scolds in a letter to Apple management. “We are profoundly distraught by what this hire means for Apple’s commitment to its inclusion goals, as well as its real and immediate impact on those working near Mr. Garcia Martinez.”

Garcia Martinez’s 2016 autobiography, “Chaos Monkeys: Obscene Fortune and Random Failure in Silicon Valley,” cast a harsh light on some of the internal workings of Big Tech and social media companies operating out of California.

His approach was purposely crass and blunt, but that isn’t what the set off the leftists at Apple.

It’s clear to anyone who reads the book that Garcia Martinez is not a fan of the stereotypical San Francisco liberal.

“Most women in the Bay Area are soft and weak, cosseted and naive despite their claims of worldliness,” he wrote.

They have their self-regarding entitlement feminism, and ceaselessly vaunt their independence, but the reality is, come the epidemic plague or foreign invasion, they’d become precisely the sort of useless baggage you’d trade for a box of shotgun shells, or a jerry can of diesel.

That portion of the book was plucked from its context by the leftists as proof that Garcia Martinez was a bona fide sexist. Yet as Substack writer Matt Taibbi notes, the context changes everything. Garcia Martinez is jokingly expressing his admiration of a woman he’s in love with by comparing her to a warrior.

Immediately following the maligned excerpt of the book, Garcia Martinez wrote, “[She] on the other hand, was the sort of woman who would end up a useful ally in that post-apocalypse, doing whatever work—be it carpentry, animal husbandry, or a shotgun blast to someone’s back—required doing.”

Whether you agree or disagree with the sentiments expressed, Garcia Martinez shouldn’t have been fired for writing them. Civil society depends on the capacity for people to engage in ideas they disagree with. In order for society to improve, it’s necessary for thoughts and philosophies to compete with each other, to further the best parts of each and to discard the worst parts.

Apple seemingly agreed that his book wasn’t sufficiently offensive to deny him a job, as “Chaos Monkeys” had been widely available for more than five years before he was hired. Apple surely would have had both the means and the motivation to make sure it wasn’t hiring someone who would damage the brand.

Yet, here we have the hiring practices of the second-most valuable company on the planet dictated by a group of angry radicals. Mere hours after the letter broke in the media, Garcia Martinez was out of a job.

Coupled with their insatiable lust for control is an outsized sense of self-importance. In the same letter to Apple upper management, the aggrieved employees wrote, “We demand an investigation into how his published views on women and people of color were missed or ignored, along with a clear plan of action to prevent this from happening again.”

The fact that employees are demanding management kowtow to their views is troubling. We should not sit idly by as demagogues push their totalitarian views on the larger public. If we wish to have a robust debate of ideas, woke mobs of disgruntled employees cannot be the arbiters.

For all the pain these companies inflict on themselves, however, there’s a simple fix: Ignore it. The views of the Twitterati don’t represent real life. The more undue influence given to the shrieking harpies online, the worse things get.

Companies should treat these woke employees like they would children throwing a tantrum by refusing to give them what they want.

Nobody wants to live in a world where a job can be snatched away by a mob in a span of hours. So why do we let them?