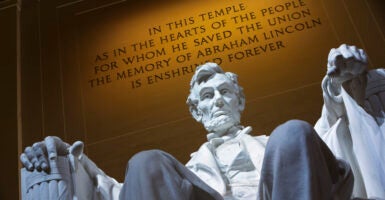 "Lincoln is one of dozens of historical figures who, according to a school district naming committee, lived a life so stained with racism, oppression or human rights violations, they do not deserve to have their name on a school building,” the San Francisco Chronicle reports. Pictured: the Abraham Lincoln statue in the Lincoln Memorial. (Photo: Jon Hicks/Getty Images)

Editor’s note: The San Francisco school board voted Tuesday to rename 44 public schools in the school district. Among the figures with “dishonorable” or racist legacies, according to the school board, were Abraham Lincoln and George Washington.

In December, Jarrett Stepman wrote about how the war on history has even come for Lincoln and what the larger agenda of the iconoclasts is. Here is the article:

Abraham Lincoln didn’t do enough for black lives, according to militant proponents of the woke revolution.

In October, the San Francisco Unified School District School Names Advisory Committee suggested a list of school names to be replaced in the city. On that list was a school named after Lincoln, the Great Emancipator.

In just a few years, the discussion about history and monuments has gone from whether we should keep Confederate monuments to erasing the president who orchestrated the Confederacy’s destruction.

Regarding Lincoln, it seems the woke and John Wilkes Booth are now in alignment.

This isn’t a slippery slope, it’s a freefall without a parachute.

A recent report by the San Francisco Chronicle that has been making the rounds illuminates just how bad things have become in some education circles.

“Lincoln is one of dozens of historical figures who, according to a school district naming committee, lived a life so stained with racism, oppression or human rights violations, they do not deserve to have their name on a school building,” the San Francisco Chronicle reported.

Part of the criticism of Lincoln is about how he treated Native Americans badly, particularly the Sioux tribe. This has always been an unfair charge, but he was simply added to the renaming committee’s list without debate.

According to the committee chairman, this isn’t the only reason for abandoning Lincoln.

“Lincoln, like the presidents before him and most after, did not show through policy or rhetoric that black lives ever mattered to them outside of human capital and as casualties or wealth building,” Jeremiah Jefferies, the chairman of the renaming committee and a first-grade teacher, told the Chronicle.

Lincoln conducted a war, signed the Emancipation Proclamation, and got shot in the head for black lives, but this wasn’t enough to keep him from being unceremoniously ditched by modern social justice warriors.

If Lincoln doesn’t qualify as doing enough for black lives, then who does?

I wrote about this whole San Francisco schools travesty when their list was released. The extensive criteria was clearly designed to appeal to the most fervently woke:

This led to not just Lincoln, but George Washington, John Muir, Junipero Serra, and even an abolitionist being added to the rolls of the damned.

The Daily Signal contacted the San Francisco Unified School District about whether the name changes can still be prevented, but it did not respond.

The problem with the woke revolution is that as it wages war on the past, it operates entirely outside of the human experience.

If the criteria were really taken to its logical conclusions, then it would lead to erasing pretty much every leader and people in all human history.

Every person, every leader who does not fit the agenda of the modern woke left is subjected to impossible and often absurd standards. No president could make it through the roulette wheel of social justice created by activists who need only preach to like-minded apostles rather than lead a large, complex society.

On the naughty list was also, humorously enough, Sen. Dianne Feinstein, D-Calif., who was condemned for replacing a vandalized Confederate flag in 1968. Feinstein may be a progressive, but she’s clearly angered some on the far left.

“On a local level, Dianne Feinstein chose to fly a flag that is the iconography of domestic terrorism, racism, white avarice, and inhumanity towards black and indigenous people at the city hall,” Jefferies said. “She is one of the few living examples on our list, so she still has time to dedicate the rest of her life to the upliftment of black, First Nations, and other people of color. She hasn’t thus far, so her apology simply wasn’t convincing.”

It’s interesting that Jefferies says the agenda is about uplifting “black, First Nations, and people of color,” but are not all these groups, through the lens of history, also guilty of virtually every transgression on the committee’s list of criteria?

The cancelation list appears to have been selectively curated to avoid targeting more recent left-wing heroes, like famed labor leader Cesar Chavez, whose name adorns schools, streets, and buildings around the city. Chavez fervently opposed illegal immigration as a young man, which should have made him ripe for cancelation.

The bottom line is that the war on history is ultimately about political power and iconoclasm. It’s about tearing down 1776 and replacing it with the narrative of the 1619 Project. The message has little to do with actual history, it’s simply: “Do what we say, or you will be smashed and erased.”

Symbols of opposition will be torn down. You must accept our truth, or else.

Targeting Feinstein sends a clear message that the revolution shall be subject to no law. It’s a warning to public officials not to stop or fix the damage done by mobs and vandals to statues, monuments, and public property.

This is entirely consistent with the ideology of leading “anti-racists,” like Ibram X. Kendi. The world is divided into anti-racists and racists. Every act, every decision, and every person must be put through this lens. Absolute anarchy and absolute tyranny are perfectly acceptable if one remains on what woke intellectuals and officials deem the “right side of history.”

The idea that canceling Lincoln, or any of the other people on the San Francisco Unified School District list, will lead to tolerance or a better society is a joke. If anything, it teaches students to be ruthlessly intolerant, to be utterly incapable of understanding different perspectives and the limitations of human nature.

Perhaps this is the point.

But human civilization wasn’t built by angels, and it certainly wasn’t built by revolutionary Marxists, who have been much more successful at tearing down in a tide of inhuman carnage than building up.

Unfortunately, absurd militant wokeness is not just confined to San Francisco, it’s coming to schools and institutions around the country.

No wonder Americans are increasingly worried about the rise of socialism.