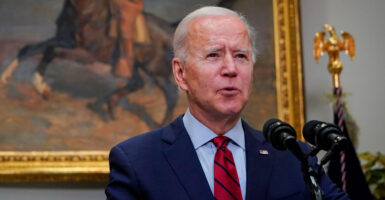 President Ronald Reagan once said, “The nine most terrifying words in the English language are: ‘I’m from the government, and I’m here to help.’”

Those words couldn’t ring truer today as President Joe Biden recently introduced the American Families Plan, a $1.8 trillion taxpayer-funded proposal that would radically undermine American families instead of help them. It would leave families with less control over their lives while failing to solve real problems Americans face in child care, education, health care, and welfare—problems the proposal alleges to address.

For years, I’ve spoken up about what I call the unintended consequences of liberals’ misguided compassion. Practically every big-government social program that liberals have instituted in America has ended up doing more harm to the people they’ve claimed they were trying to help. I know because I lived that experience as a child, and I’ve witnessed it every day in black communities in the six decades since. The American Families Plan fits into this category.

Let’s look at some of what the left says it wants to achieve and what the plan would actually do.

The left says the plan will provide a government-paid family leave program for employees who need extended paid time off for family issues.

What the plan would actually do is create a one-size-fits-all government program that would be more restrictive and less generous than existing employer-provided programs. Instead of simple, flexible, employer-provided programs, employees would be at the mercy of a federal bureaucracy with rigid eligibility requirements and waiting periods before they could access benefits.

And such a program isn’t needed. After the 2017 tax cuts and regulatory reductions, more money was left in the coffers of private sector employers, and many used those dollars to provide family leave to employees. In fact, the percentage of companies offering paid leave has more than doubled, to 55% offering maternity leave and 45% providing paternity leave. As more employers offer such competitive benefits, others are sure to follow suit.

What the plan would actually do is add costly new regulations that won’t just drive up child care costs but also limit the supply of care by making it harder for smaller and more flexible providers to operate. The most accessible and best child care used to be provided in churches (I remember how plentiful they were in African American communities), yet the government continues to regulate these wonderful places out of existence.

Moreover, families that make the financial sacrifice to have one parent stay home with young children will be unfairly forced to pay for other families’ child care.

The left also says the president’s plan will provide free universal government-run preschool, which it claims will help children academically far into the future.

What the plan would actually do is spend $200 billion on “free” preschool, even though research shows that government preschool programs consistently fail to live up to their promises and actually can have negative consequences.

A recent U.S. Department of Health and Human Services study shows that the Head Start program (another government preschool program) had little to no impact on the cognitive, social-emotional, and health outcomes of children.

What the plan would actually do is discourage welfare recipients from looking for work; discourage marriage; and provide new, much bigger cash payments for families that don’t work at all.

The plan rewards nonworking single parents over those families that are married and working (two key factors for escaping poverty). Under the proposal, a family that chooses not to work would receive almost three times as much in new benefits as a median-income working family.

As the old axiom goes, you get more of what you subsidize. Eliminating incentives for work and marriage would return us to the days when families on welfare were stuck in long-term poverty, when unwed teen births rose year after year, and when intergenerational poverty meant that 1 in 7 children were dependent on welfare.

There are many more parts to the American Families Plan—from community college to health care—and they would all grow the federal government’s control of some of the most personal aspects of family life while failing to respond to the actual needs people have. The plan would also impose significant financial burdens, increasing costs, and taxes when we are desperately trying to recover from the economic devastation of a worldwide pandemic.

If we really want to help families, the administration should abandon this plan and look to policies that actually support families. Eliminating marriage and work penalties in the welfare system, encouraging private sector flexibility in family leave and child care, and offering access to better private health plans are some good places to start.