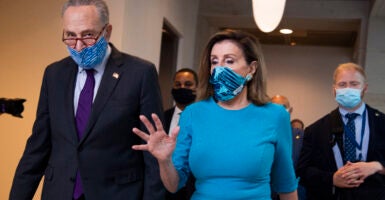 But it also gives lots of money to people who don’t need funds.

Maryland, which even The Washington Post admits is “flush with cash,” got enough extra money to pass a budget that “hands bonuses to every state worker.”

Even Atherton, California, where the median home price is $6 million, got HEROES Act money.

“There was no means test,” complains Lisa Conyers, author of “Welfare for the Rich,” in my latest video.

Welfare for the rich didn’t start with coronavirus relief bills. Politicians have done it for years, and a pandemic didn’t stop them.

Nevada politicians gave Oakland Raiders owner Mark Davis $750 million for a new stadium. A stadium designer says Davis insisted on the very best, including natural grass on a field that “moves in and out of the building in one piece.”

Cool. But why didn’t Davis pay for it himself?

Minnesota gave the Minnesota Vikings $348 million for their new stadium. Santa Clara, California, gave the San Francisco 49ers $114 million, plus $850 million in loans. Team co-owner Denise York and her family are worth $3.5 billion, says Forbes. She ought to fund her own stadium.

“The taxpayers often vote for this stuff,” I say to Conyers, “so they must like it.”

“[T]hey’re promised there’s going to be all these jobs,” she replies, “not only at the stadium but at the hotels that are going to rise up around the stadium.”

Politicians always promise that public investment will return more in benefits to taxpayers. But it’s not true.

A study by the Federal Reserve Bank of Kansas City found new stadiums bring in about $40 million in jobs and tax benefits, much less than the $188 million that taxpayers pay.

Handouts to other corporations fare no better.

Wisconsin gave nearly $3 billion in tax breaks to Foxconn because it promised to create 13,000 jobs. Now the company promises to create only 1,454.

“If you look at the cost of each job, it was a million dollars,” Conyers points out.

Actually, it was more than a million.

Then there’s the farm subsidy scam.

Both Republicans and Democrats eagerly give your money to agribusiness, even though farmers are now richer than the average American.

The politicians claim the handouts are not a payoff for political contributions but to “make sure there’s enough food to go around,” since “farmers have no control over price fluctuations and the weather.”

But that’s absurd. Other businesses adjust to price fluctuations and weather. America doesn’t subsidize fruit and vegetable farmers—yet we have plenty of fruits and vegetables.

The politicians claim they want to help “small family farms,” but they give 90% of the subsidies to the biggest farms.

Such welfare for the rich persists because, years ago, politicians voted for a handout, and once they start giving your money away, they never stop.

“I’m an American taxpayer,” says Conyers. “I don’t understand why money is leaving my pocket and going into the pocket of somebody who is wealthy.”