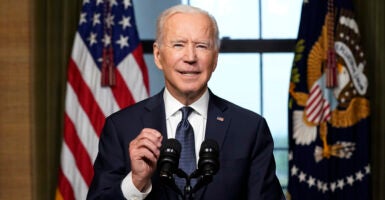 President Joe Biden speaks from the Treaty Room in the White House about the withdrawal of U.S. troops from Afghanistan, April 14. (Photo: Andrew Harnik-Pool/Getty Images)

Wars often arise from uncertainty. When strong countries appear weak, truly weaker ones take risks they otherwise would not.

Sloppy braggadocio and serial promises of restraint can trigger wars, too. Empty tough talk can needlessly egg on aggressors. But mouthing utopian bromides convinces bullies that their targets are too sophisticated to counter aggression.

Sometimes announcing “a new peace process” without any ability to bring either novel concessions or pressures only raises false hopes—and furor.

Every new American president is tested to determine whether the United States can still protect friends such as Europe, Japan, South Korea, and Israel. And will the new commander in chief deter U.S. enemies Iran and North Korea—and keep China and Russia from absorbing their neighbors?

President Joe Biden, and those around him, seem determined to upset the peace they inherited.

Putin earlier had concluded that Trump was dangerously unpredictable, and perhaps best not provoked. After all, the Trump administration took out Russian mercenaries in Syria. It beefed up defense spending and upped sanctions.

The Trump administration flooded the world with cheap oil to Russia’s chagrin. It pulled out from asymmetrical missile treaties with Russia. It sold sophisticated arms to the Ukrainians. The Russians concluded that Trump might do anything, and so waited for another president before again testing America.

In contrast, Biden often talks provocatively—while carrying a twig. He has gratuitously called Putin “a killer.” And he warned that the Russian dictator “will pay a price” for supposedly interfering in the 2020 election.

Unfortunately, Biden’s bombast follows four years of a Russian collusion hoax, fueled by a concocted dossier paid for by the Democratic National Committee and the campaign of 2016 Democratic presidential candidate Hillary Clinton. Biden and others claimed Trump was, in the words of former President Barack Obama’s former director of national intelligence, James Clapper, a “Russian asset.”

If Biden is seeking to provoke a nation with more than 6,000 deliverable nuclear weapons, he is certainly not backing up his rhetoric with force.

Biden may well decrease the Pentagon budget. He also seems to have forgotten that Trump was impeached for supposedly imperiling Ukraine, when in fact he sold Ukraine weapons.

While Biden was talking loudly to Putin, his administration was being serially humiliated by China. Chinese diplomats dressed down their American counterparts in a recent meeting in Anchorage, Alaska. They gleefully recycled domestic left-wing boilerplate that a racist America has no moral authority to criticize China.

If Trump was unpredictably blunt, Biden is too often predictably confused. And he appears frail, sending the message to autocracies that America’s commander in chief is not fully in control.

Biden has not, as he promised, demanded from China transparency about the origins of the COVID-19 virus in Wuhan. By summer, that plague may have killed 600,000 Americans.

More disturbing, as Russia puts troops on the Ukrainian border, China is flying into Taiwanese air space, testing its defenses—and the degree to which the United States cares.

For a half-century, American foreign policy sought to ensure that Russia was no closer to China than either was to the United States. Now, the two dictatorships seem almost joined at the hip, as each probes U.S. responses or lack thereof. Not surprisingly, North Korea in late March resumed its firing of missiles over the Sea of Japan.

In the Middle East, Biden inherited a relatively quiet landscape. Arab nations, in historic fashion, were making peace with Israel. Both sides were working to deter Iranian-funded terrorists. Iran itself was staggered by sanctions and recession. Its arch-terrorist mastermind, Gen. Qassim Suleimani, was killed by a U.S. drone strike.

Under Trump, the United States left the Iran nuclear deal, which was a prescription for the certain Iranian acquisition of a nuclear weapon. The theocracy in Tehran, the chief sponsor of terror in the world, was in its most fragile condition in its 40 years of existence.

Now, U.S. diplomats bizarrely express an interest in restoring cordial relations with Iran, rebooting the Iran deal, and dropping sanctions against the regime. If all that happens, Iran will likely get a bomb soon.

More importantly, Iran may conclude that the United States has distanced itself from Israel and moderate Arab regimes.

One of two dangers will then arise. Either Iran will feel it can up its aggression, or its enemies will conclude they have no choice but to take out all Iranian nuclear facilities.

Biden would do well to remember old American diplomatic adages about speaking softly while carrying a big stick, keeping China and Russia apart, being no better friend (or worse enemy), and letting sleeping dogs lie.