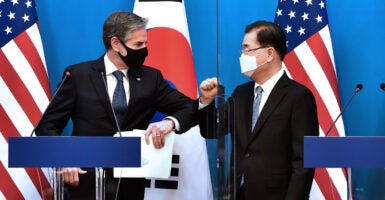 Although the Biden administration’s policy toward North Korea has not yet been released, several aspects of it became clear from the first overseas trip by Biden Cabinet officials to Asia.

Senior U.S. officials, including Secretary of State Tony Blinken and Secretary of Defense Lloyd Austin, met with government officials in Tokyo and Seoul on March 16-18, signaling the importance of the region to U.S. strategic objectives.

Strident public messages from North Korea, released concurrent with the secretaries’ trip, and evident policy differences between the U.S. and South Korea marred the otherwise consistent positive messages from the meetings.

A dominant message throughout the trip was the importance of alliances to address the North Korean threat. Negotiations to reach an agreement of host-nation support negotiations with Seoul and Tokyo emphasized a return to traditional U.S. views of alliances as based on common values and Washington’s unwavering commitment to defend its Asian allies.

Details of the agreements have not yet been formally disclosed but will remove a major source of tension within the alliances.

The Biden administration repeated its commitment to engage with North Korea, and confirmed that it had unsuccessfully attempted several times to initiate dialogue with North Korea through several channels.

Blinken and Austin repeatedly emphasized that the Biden administration’s position would be to insist that North Korean fully denuclearize rather than push for more limited arms control objectives, as advocated by some outside experts.

Blinken repeatedly used the phrase “denuclearization of North Korea” to emphasize that point rather than “of the Korean Peninsula,” as contained in earlier diplomatic agreements.

The kerfuffle over terminology reflects the difference between what Pyongyang is required to do under 11 U.N. resolutions and terminology pushed by the regime to include U.S. military forces in South Korea and surrounding areas.

In the 1992 inter-Korean nuclear agreement, North Korea promised never to build nuclear weapons nor to possess the plutonium reprocessing or uranium enrichment means to do so.

In the September 2005 Six-Party Talks statement, the U.S., China, Russia, Japan, North Korea, and South Korea agreed to “denuclearization of the Korean Peninsula,” but Washington also insisted that Pyongyang agree to “abandoning all nuclear weapons and existing nuclear programs.”

The failure of the Trump administration to insist on similar language in the Singapore statement, and instead accepting only the North Korean terminology, opened the door for Pyongyang to push its expansive definition.

During the secretaries’ trip, senior officials of the North Korean Kim Jong Un regime released statements harshly criticizing the United States and South Korea, and seemingly shut the door on dialogue and negotiations.

Kim Yo Jong, sister of North Korea’s leader, and First Vice Minister of Foreign Affairs Choe Son Hui reiterated the regime’s long-standing defiance against complying with denuclearization requirements of U.N. resolutions and refused to engage with the United States.

Instead, Kim Yo Jong demanded that the U.S. and South Korea abandon all military exercises, even small-scale and virtual computer simulations.

North Korea has made engaging with the United States contingent on the U.S. ending its “hostile policy,” which the regime defines as all U.S. and international sanctions, the U.S.-South Korean alliance, the presence of U.S. forces in South Korea, any criticism of the regime, and even South Korea’s constitutionally-protected freedoms of media and speech.

Despite the rhetoric against engagement, Pyongyang may eventually agree to return to negotiations, either before or after yet another provocative violation of U.N. resolutions.

The Biden administration should publicly affirm its willingness to engage in talks while emphasizing that it is North Korea, not the United States, which has been the impediment to a diplomatic resolution.

Moving forward, the basis for negotiations should be the denuclearization requirements of the U.N. resolutions as well as North Korea’s previous promises to abandon its nuclear arsenal and programs. In the meantime, Washington must maintain a policy of strong military deterrence and continue to coordinate policies with Seoul and Tokyo.

Blinken’s and Austin’s trip made important steps in doing so.