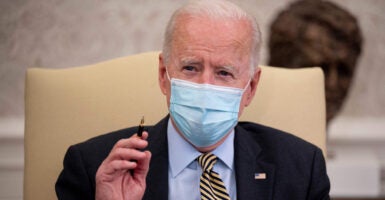 President Joe Biden has proposed a defense budget that will fail to adequately meet the needs of the Pentagon. (Photo: Jim Watson/AFP/Getty Images)

If there is one thing that is quite clear in the early days of the Joe Biden presidency, it is the administration is more than willing to spend taxpayers’ dollars, and their children’s dollars, and their grandkids’ … you get the idea. However, when it comes to providing for the common defense, a constitutionally mandated task, the Biden administration suddenly discovered frugality.

Earlier today, the administration released a defense budget for fiscal year 2022 which proposes a meager increase of 1.5%—$705 billion to $715 billion—which is not enough to cover the expected 2.2% inflation in the Pentagon.

Meanwhile, the administration has requested a 16% increase in the nondefense portion of the discretionary budget.

Compare this insufficient resourcing to the administration’s willingness to spend $1.9 trillion on a COVID-19 “relief bill” (that spends 90% on issues unrelated to COVID-19) and a proposed $2.25 trillion “infrastructure” package (but allocates only 5% to roads and bridges).

All of these trillions are on top of the annual federal budget, which is close to $4 trillion every year.

Don’t you worry, the Biden team also has a plan for those trillions, which it released April 9. It follows the same tax-and-spend formula from the last two spending packages under the current administration.

These spending sprees add insult to the injury that the Biden administration’s defense budget will cause.

Every year, the Pentagon is faced with a bill for inflationary costs unrelated to its main job of training, equipping, and executing the missions necessary for our national defense—mainly increases in health care costs, personnel salaries, and fuel. Thus, whenever the defense budget does not keep up with inflation—historically around 2%—the department is effectively losing purchasing power and makes painful cuts in existing programs and plans.

That was exactly the scenario under the last years of the Obama administration—a budget that did not keep up with inflation, leading to reduced resources for readiness, followed by an entirely predictable readiness crisis.

As The Heritage Foundation’s Index of U.S. Military Strength attests, the military is only now recovering from that readiness crisis. The investments made during the Trump administration have allowed the military to improve its readiness and start refocusing on great power competition.

However, this is not a task that can be accomplished in the three years following the publication of the 2018 National Defense Strategy, which changed the United States’ main defense task from terrorism to great power competition. It is a task that will take time and consistent investment.

Obviously, great power competitions are not simply decided by a nation throwing more money at its military than its adversary. The driving ethos and character of its people—the ideas that form a nation—also play a role. However, maintaining a technologically advanced and relevant military is an extremely important part of deterring malign activity in the world.

Thankfully, Congress will have the last say on how the Pentagon is funded and will be able to properly prioritize our national defense and the challenges ahead of our warfighters.