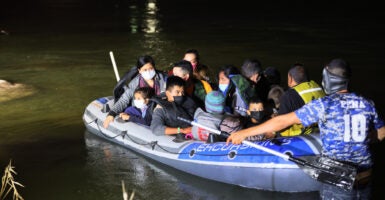 "Now we’ve got COVID issues with people coming across the border that are positive for COVID, and they are being confined in large groups and small areas," Texas Attorney General Ken Paxton says. Pictured: Migrants arrive illegally in the United States on Monday by crossing the Rio Grande in a raft near Roma, Texas. (Photo: Joe Raedle/Getty Images)

Three current or former government officials joined a recent Heritage Foundation online discussion of how to stop what they called a humanitarian crisis at the southern border as thousands of migrants seek to enter the United States.

Texas Attorney General Ken Paxton, one of the featured speakers, expressed concern over a potential increase in COVID-19 cases across the nation because of how the Biden administration is processing illegal immigrants.

“Now we’ve got COVID issues with people coming across the border that are positive for COVID, and they are being confined in large groups and small areas where it’s much easier to spread,” Paxton, a Republican, said during the March 25 webinar on “Battling the Biden Border Crisis.”

The other featured speakers were Rep. Tom McClintock, R-Calif., and Gene Hamilton, a former senior official in the Justice Department as well as the Department of Homeland Security.

“The Biden administration already announced the only people they’re going to deport are spies, terrorists, and certain kinds of aggravated felons,” the Texas attorney general said.

Biden stopped construction of the border wall immediately after his inauguration Jan. 20, costing taxpayers $6 million per day by one estimate.

Biden also ended the Trump administration’s “Remain in Mexico” program, which allowed officials to return asylum-seekers to Mexico as their claims were adjudicated in U.S. immigration courts, the webinar participants noted.

And Biden ended Asylum Cooperative Agreements with Central American countries and promised amnesty and family unification in the United States. He ordered U.S. Immigration and Customs Enforcement not to deport illegal immigrants for the first 100 days.

Border Patrol agents reportedly have been arresting 4,500 to 6,000 migrants per day, with the Biden administration quickly processing and releasing them into the U.S.

“People call their family members, they call back home to Guatemala, to Honduras, to El Salvador, and they say, ‘Hey, look, I made it,’” Hamilton said.

The Biden administration has “taken a radical position,” the former homeland security official added. “It has been advanced by the radical left for a long time, and they can’t accept basic facts on illegal immigration at the border.”

The situation encourages more migrants to repeat that same kind of behavior, he said.

Later, Hamilton said that most of those seeking to enter the U.S. don’t want asylum, but economic prosperity, and that most asylum claims aren’t granted.

Then-President Donald Trump, on March 21, 2020, implemented a provision known as Title 42, prohibiting the entry of anyone who poses a health risk due to the COVID-19 pandemic.

The Biden administration wasn’t enforcing this measure, Hamilton said, noting that “90% of the family units encountered, I think it was the week between March 14 and March 21, were not expelled via Title 42.”

Hamilton warned that this “means that all of them were caught and released into the United States.”

“They will never be deported,” he said, “so that will mean we will continue to see the numbers will slowly tick up.”

McClintock, the congressman from California, talked about the magnitude of the crush of migrants trying to cross the border.

“The number [of migrant children] we’re holding right now pending release into this country is the entire population of Truckee, California,” McClintock said, referring to a town with about 16,500 residents.

Biden’s immigration policies disproportionately hurt the working class by bringing in a massive surplus of low-skilled workers, he said.

“It was America’s working-class families who had the most to gain by slowing the influx of low-wage illegal labor,” McClintock said.

To compare the border security policies of Trump and Biden, click here for a Heritage Foundation report.