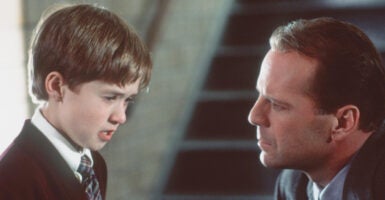 Editor’s note: The following is satire.

Consider the wild success that the Biden administration has enjoyed in its unilateral modification of the term “sex” in federal anti-discrimination law to include “gender identity” (aka what someone might feel like on any given day).

Now, President Joe Biden is reversing a rule inherited from his predecessor that defined “death” as the complete cessation of biological life, in an effort to prevent “discrimination” in health care practices against the dead, mostly dead, and undead people.

The Department of Health and Human Services made the announcement today.

The notice of enforcement, while not a binding federal rule, signals that the federal government will begin interpreting Section 1557—the nondiscrimination provision of the Patient Protection and Affordable Care Act (aka “Obamacare”)—to include a ban on discrimination based on the inability to fog up a mirror.

The change will likely require that states, which set their own Medicaid eligibility requirements, provide medical treatment for the dead who wish they were, well, not “dead,” as well as to continue Medicare, Medicaid, and Social Security payments to people who make the lifestyle choice of “living” on the other side of 6 feet under.

The Supreme Court has made clear that people have a right not to be discriminated against on any irrational basis and to receive equal treatment under the law, regardless of their lack of a pulse or inability to generate brain waves.

That’s why today the Department of Health and Human Services announced it will act on related reports of discrimination.

Many private insurers, such as Death Row Inc., already cover medical treatment of the dead and have an incentive to comply with the Biden administration’s definition of discrimination in order to avoid expensive litigation that, since the plaintiffs are already dead, could literally go on forever.

Certain state governments, especially those that lean Republican, will likely pursue legal action for a number of reasons, including to control costs via “medical necessity” determinations and to prevent controversial medical procedures from being performed on people whose remains deteriorated long ago.

The Biden administration has not yet announced how medical care can be provided for people who were cremated and had their ashes scattered. It has clarified that it will form a task force for the purpose of determining such benefits for those without any physical remains available. It has asked Congress for the appropriation of $1 trillion to do so.

As part of the appropriation, Biden’s spokesperson, a former executive producer for AMC’s “The Walking Dead,” has noted that the task force will be helmed by a political appointee able to speak in grammatically correct sentences. Actor Haley Joel Osment, who played a child psychic who could “see  dead people” in the 1999 sci-fi film “The Sixth Sense,” will serve as principal adviser to the task force.

Since state governments are also employers, former, now-dead employees—or advocacy groups suing on their behalf—could allege that their employers’ health care plan is discriminatory, and demand the court force coverage for whatever medical treatment the groups think would be worthwhile for the dead to receive and to which they are now entitled.