It’s Time to Get Serious About Reforming World Trade Organization 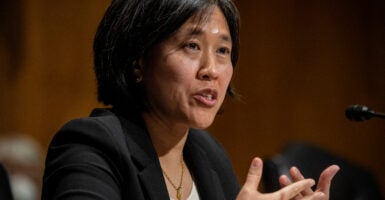 Katherine Tai, seen here Feb. 25 at her confirmation hearing before the Senate Finance Committee to be the U.S. trade representative, is set to make her Group of Seven debut in the position on Wednesday. (Photo: Bill O'Leary/Getty Images)

“No negotiator walks away from leverage, right? … Every good negotiator retains his or her leverage to use it.”

That’s what recently installed U.S. Trade Representative Katherine Tai emphasized in her first interview since her Senate confirmation on March 17.

The upcoming Group of Seven trade ministers meeting will offer the first glimpse of how Tai will exercise her trade negotiation know-how in practice.

On Wednesday, America’s top trade negotiator will join her counterparts from Canada, France, Germany, Italy, Japan, and the U.K. for the first official G-7 trade ministers meeting of 2021.

The G-7 trade meeting agenda will include a range of critical topics for the global economy, including World Trade Organization reform and China. The Biden administration is reportedly expected to take a hard line of its own on reforming the WTO, which will likely be “a point of contention” among the G-7 members.

It’s notable that responding to Sen. Rob Portman’s questions on the WTO during her confirmation hearing in February, Tai emphasized that the U.S. “can’t afford not to be engaged” with the global trade body, which she pointed out “does need to reform.”

The WTO does need reform, and I believe that the focus should be the WTO, now in its 26th year of existence. We need to be having hard conversations in Geneva in a constructive way, to be asking ‘What is the value of the WTO to its members? Is it accomplishing the goals that its founders and members expect of it?’

Indeed, reforming and upgrading the WTO is a priority issue for the U.S. and its trading partners, particularly the European Union, with which America has the world’s largest trade and investment relationship.

The task of correcting the current course of the WTO cannot be put off any longer. As the new WTO director-general, Ngozi Okonjo-Iweala, put it, “It cannot be business as usual.”

In encouraging better and more effective functioning of the WTO, the U.S. should consider practical ways to improve the trade body in close cooperation with our trade partners around the world.

That’s an area where many member nations think that the WTO has had little impact, and reforms are urgently needed to prevent Chinese abuses.

That’s also a critically important, much-needed space where the U.S. and Europe should work together to cultivate “a more positive and productive” trade relationship, as Tai made clear.

The U.S. should raise these serious topics of common challenges at the G-7 trade meeting.

As The Heritage Foundation has pointed out, “China has used its economic power to bully, bribe, corrupt, and steal its way up the global economic supply chain, with only limited resistance from the WTO. It is past time to plug the loopholes that allow this.”

On that critical policy front, it’s rather encouraging to hear that Tai, a Connecticut native of Chinese descent, said she plans to form an alliance with trading partners to push China on unfair trade practices.

Certainly, that plan has to be an integral part of Washington’s practical strategy to reform and upgrade the WTO.