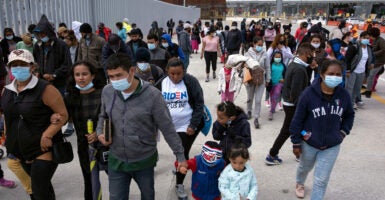 Whatever you do, don’t call the surge of attempted illegal immigrant crossings at the southern border a crisis.

That’s the message Americans and the media have been getting from the Biden administration.

Given how swiftly we’ve seen border enforcement become overwhelmed since the presidential transition in late January, there’s a good reason for Americans to consider the consequences of the rhetoric and policies of the new administration.

For as much as the Trump administration was attacked for supposedly putting “children in cages,” it certainly doesn’t look as though the Biden administration has figured out what to do now that Border Patrol is being overwhelmed.

Some of President Joe Biden’s media allies, most notably The Washington Post, have tried to bolster the line that what’s happening at the border isn’t particularly concerning or unusual. That seems dubious, even to some others at the Post.

“For the past three weeks, federal agents have apprehended on average more than 550 unaccompanied minors every day, and are on pace to bring in more than 17,000 children and teens in March, the most ever in a single month,” wrote John Daniel Davidson in The Federalist. “The numbers for April and May, when border crossings usually peak, will undoubtedly bring far higher numbers.”

It’s getting harder to ignore the burgeoning problem.

Not only are the total number of illegal attempted border crossings well beyond what even the Obama administration called a crisis, the numbers are unlike anything we’ve seen in decades. And the situation is likely only to get worse.

The explosion of illegal crossings at the border is a serious matter of national security and public health, but the Biden administration has been limiting media access to the current border operations.

Some journalists are starting to express frustration with the situation.

“There’s no modern precedent for a full physical ban on media access to [U.S. Customs and Border Protection] border operations,” wrote photojournalist John Moore, according to the New York Post. “To those who might say, ‘Cut them some slack, they are dealing with a situation,’ I’d say that showing the U.S. response to the current immigrant surge is exactly the media’s role.”

The Biden administration has said that it’s clamping down on the press as a COVID-19 safety precaution, but that seems like a weak defense, given that there are plenty of ways to work around that.

“Pandemic restrictions are not a valid excuse to block physical media access, especially to operations that are outside,” Moore wrote on Twitter. “There are easy alternative options to media ride-alongs.”

It’s become so bad that Border Patrol agents are being ordered to prevent journalists from taking video and pictures of what’s happening at the border. The photos that have emerged haven’t looked good.

The detention centers, or what CNN described as “jail-like facilities,” appear to be overflowing.

It hardly seems like the “transparency” that the Biden administration promised.

Moore isn’t alone, as a number of other journalists have also noted frustration with the lack of access.

Suppression of media coverage has even drawn the attention of some lawmakers.

“Denying the press the ability to observe, film, and report on the conditions at the border is not openness or transparency—it is hiding the truth from the American people,” Sen. Ted Cruz, R-Texas, wrote in a letter to the White House.

Cruz on Friday will lead a delegation of senators to the Texas-Mexico border in the Rio Grande Valley to see for themselves what’s happening there.

Restricting media access to the developing border crisis, one would think, would be a much bigger deal to the news media than when CNN’s Jim Acosta had his White House press pass pulled briefly after tussling with an intern over a microphone.

Biden—and those on the left in general—don’t want to confront the trade-off that comes with what they see as the  “compassion” of reducing border enforcement. Just as it did with the border crisis that ended with “children in cages” under President Barack Obama in 2014, the signal that U.S. immigration law essentially will go unenforced has led to many bad outcomes.

We’ve created a humanitarian crisis, further empowered criminal drug- and human-smuggling cartels, made our country less secure by letting in tens of thousands of people of unknown origin, and may be exacerbating a public health crisis to boot.

The same administration that has aggressively pushed the idea that Americans need to take maximum precautions to prevent the spread of COVID-19 until it’s wiped out is now allowing potentially thousands of unknown new health risks into our population.

I’m no public health official, but that seems problematic. At the very least, the American people deserve to be informed about what exactly is happening at our southern border.

Allowing press access to cover the border crisis would be a good start.

Evenhanded coverage of what’s happening there would be even better.