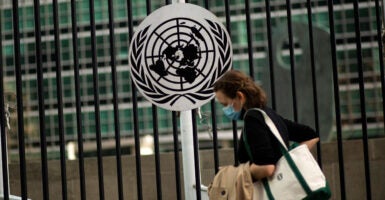 The United Nations Human Rights Council is scheduled to adopt the outcome of its review of the United States’ human rights record on Wednesday. However, this review process is flawed. Pictured: A woman wearing a face mask runs past the United Nations headquarters in New York on March 11. (Photo: Kena Betancur/AFP/Getty Images)

The United Nations Human Rights Council is scheduled to adopt the outcome of its review of the United States’ human rights record on Wednesday.

This will be the third time the United States has undergone this process, known as the universal periodic review, through which U.N. member states have their human rights practices examined, field questions about their human rights record, and declare what they have done and intend to do to improve.

While widely praised by human rights advocates, the universal periodic review, like the Human Rights Council itself, is flawed and vulnerable to politicization.

provides an opportunity for all States to declare what actions they have taken to improve the human rights situations in their countries and to overcome challenges to the enjoyment of human rights. The [universal periodic review] also includes a sharing of best human rights practices around the globe. Currently, no other mechanism of this kind exists.

The universal periodic review may be unique, but it is also an uneven and politicized process that, ironically, reveals more about the U.N. approach to human rights than it does about the human rights it purports to review.

On the positive end, some governments honestly wish to improve their human rights situation, but do not know where to focus. The universal periodic review can be useful for these countries, either in identifying areas for improvement or helping to galvanize domestic support for action.

Even in these instances, however, detailed recommendations of how exactly to improve or change laws are not prominent, often buried in the nongovernmental organizations’ submissions.

For instance, a common recommendation is to ratify a human rights treaty, but ratification means little without efforts to implement and enforce those rights in domestic law. Indeed, the world is full of countries that have ratified human rights treaties but routinely ignore their provisions.

To the extent that the universal periodic review encourages self-examination and dialogue with civil society, it is a worthy pursuit.

If this were the sum and total of the universal periodic review, it would be useful and positive process. Alas, it is not.

The idea that the United States leaves the universal periodic review more knowledgeable about its human rights situation is farcical.

Instead, the goal for most of the participants is to advance political agendas. For instance, nearly a third of the recommendations in the third universal periodic review cycle either involve accusations of international crimes (from the likes of China, Cuba, Iran, and Syria) or urge the United States to ratify treaties that it has chosen not to join, restrict freedom of speech, end the death penalty, etc.

Historically, America has received more criticism of its human rights practices and recommendations for improvement than any other nation.

Over the entirety of the past three cycles of the universal periodic review, America has received far more recommendations for improving its human rights than any other country, which naturally implies that the U.S. human rights record is the worst in the world.

Does anyone seriously believe this? Of course not, but it serves the purposes of the world’s worst human right abusers by establishing a moral equivalence on human rights between them and the United States.

The universal periodic review also provides an opportunity to obscure problems rather than reveal them. As U.N. Watch has noted, governments like Iran, North Korea, and the Democratic Republic of the Congo game the process to make sure that the majority of comments praise their human rights records irrespective of reality.

According to Human Rights Watch, China’s 2018 review was

marred by the U.N.’s own complicity with China’s quest for a critique-free review. While accepting—seemingly without question—contributions from groups that praised China’s rights record, U.N. officials removed without explanation the submissions from Hong Kong, Tibetan, and Uyghur groups that are critical of Beijing. Many of the excluded contributions were reinstated at the eleventh hour, but the damage was done.

There is no accountability in the universal periodic review process or means to reject abject falsehoods.

These obvious untruths are duly included in the universal periodic review documentation and, thereby, granted the patina of U.N. endorsement.

That the U.N. human rights system is highly flawed is no surprise. What makes the U.N. useful in global politics also makes it poorly suited to champion human rights: namely, the U.N. principle of sovereign equality of nations.

In political matters, sovereign equality makes sense because governments are counterparts, and broad consensus among them can be a highly desirable outcome in addressing multilateral problems.

Human rights are about principle, however, not compromise. In the case of human rights, equivalence between nations that respect human rights and those that do not is a recipe for erosion.

As long as the U.N. human rights system reflects its membership, most of which are judged partly free or unfree by Freedom House, it will disappoint on human rights. But it need not disappoint so regularly or so deeply.

The Biden administration has reengaged the Human Rights Council and pledged to “address the Council’s deficiencies.”

Improvement starts with improving the Human Rights Council membership and eliminating bias in addressing human rights situations. It is preserved by working closely with other governments that respect human rights to reflect those values in the council.

A mandatory review of the Human Rights Council is required between 2021 and 2026. The Biden administration should insist that the review be conducted promptly and use the opportunity to challenge U.N. member states to adopt reforms so that the council can better live up to its mandate.

The deficiencies of the Human Right Council, however, will not be overcome by goodwill or participating in the universal periodic review. If the council is to live up to expectations, the United States must demand fundamental reforms.