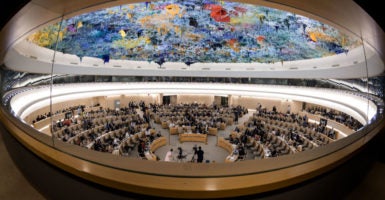 The U.N. Human Rights Council rarely holds human rights abusers to account if they are powerful or influential in the U.N. system. Pictured: The United Nations Human Rights Council room during a debate related to the killing of Saudi journalist Jamal Khashoggi in Geneva on June 26, 2019. (Photo: Fabrice Coffrini/AFP/Getty Images)

The five-member body interviews applicants for roles as independent United Nations experts of the Human Rights Council and makes recommendations to the president of the council.

As noted by U.N. Watch, that means that “China will be able to influence the selection of at least 17 U.N. human rights mandate-holders over the next year, known as special procedures, who investigate, monitor, and publicly report on either specific country situations, or on thematic issues in all parts of the world, such as freedom of speech and religion.”

U.N. Watch is a Geneva-based nongovernmental organization whose stated mission is “to monitor the performance of the United Nations by the yardstick of its own charter.”

As noted by Rep. Chris Smith, R-N.J., it’s appalling that one of the world’s most prominent violators of human rights would be appointed to such an influential position. Unfortunately, it’s a repeat outrage. China was previously on the Consultative Group in 2009-2010.

This latest hypocrisy is par for the course for the Human Rights Council.

It has exhibited extraordinary bias against Israel. Nearly half of the condemnatory resolutions passed by the council in its history have focused on Israel.

The council rarely holds human rights abusers to account if they are powerful or influential in the U.N. system.

It has never passed a condemnatory resolution on China, Cuba, Russia, or Saudi Arabia, despite their terrible records on religious persecution, punishment of political dissent, hostility to freedom of the press, and unequal rights for women, respectively.

Currently, 11 of the 47 members of the council (including Afghanistan, Eritrea, Qatar, Libya, and Venezuela) are ranked “not free” by Freedom House.

Even in its absence, however, China will exert influence through its position on the Consultative Group.

The fact that countries with deplorable human rights records routinely win elections to the council indicates that the majority of the world’s governments—as evidenced from their votes in the United Nations General Assembly—see no problem with electing human rights violators to the U.N.’s highest human rights body.

For all of these reasons, the Trump administration rightfully decided to leave the Human Rights Council in 2018 after its efforts to reform the seriously flawed body were rebuffed by other governments.

How many outrages must be committed before other governments join the United States in recognizing the dire need to reform the U.N. Human Rights Council?