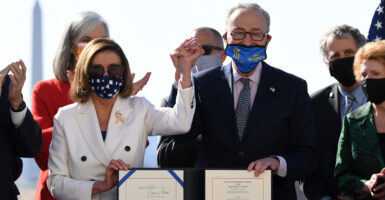 To remain in power in 2022 and beyond, Democrats must change the electoral system, redraw congressional maps, and “add as many states as we can,” a former campaign operative for President Barack Obama says.

Such systemic changes, similar to what Democrats are trying to enact through a bill known as HR 1, are key, David Shor said in an interview with New York magazine.

“White voters as a whole trended toward the Democratic Party, and nonwhite voters trended away from us,” Shor said.

Shor, a senior fellow at the left-leaning Center for American Progress, also is head of data science at OpenLabs, which describes itself as a “nonprofit research lab that develops a wide range of cutting-edge products used by the most important progressive organizations in the country.”

To maintain a majority in the House and Senate, Democrats must change laws now, Shor said in the interview.

“Since the [congressional district] maps in the House of Representatives are so biased against us, if we don’t pass a redistricting reform, our chance of keeping the House is very low,” Shor told the magazine, referring to Democrats.

“And then the Senate is even more biased against us than the House. So, it’s also very important that we add as many states as we can. Currently, even if we have an exceptionally good midterm [election], the most likely outcome is that we lose one or two Senate seats.”

Granting statehood to the District of Columbia and Puerto Rico would create two new Senate seats for each, and Democrats likely would win all four seats.

“I think that if we implemented D.C. and Puerto Rican statehood and passed redistricting reform, that would roughly triple our chance of holding the House in 2022 and roughly the same in the Senate,” he said.

Democrats have tried to frame the legislation as an anti-corruption, voting rights bill. But in the interview with New York, Shor appeared to say the quiet part out loud: If signed into law by President Joe Biden, the legislation could give Democrats a long-term structural advantage in winning elections.

Noting that the party in power nationally typically loses congressional seats in midterm elections, Shor said changing the system could keep Democrats in power for the foreseeable future if Biden and the current Democrat majority in Congress are willing to make changes.

“The fact that it’s possible to triple those odds is a testament to how bleak the baseline case is,” he said. “So we need to pass those reforms and we need Biden to remain popular.”

Shor was a key player in Obama’s data-driven 2012 re-election campaign, which microtargeted voters.

Crunching the numbers from the 2020 election, Shor told New York magazine that Democrats gained 7% among white college graduates but between only half a percent to 1% among white voters who aren’t college educated.

Democrats lost the support of black voters by 2% and Hispanic voters by more than 8%, he said.

“The jury is still out on Asian Americans,” Shor said, adding: “But there’s evidence that there was something like a 5% decline in Asian American support for Democrats, likely with a lot of variance among subgroups.”

This came as a surprise, he said.

“I don’t think a lot of people expected Donald Trump’s GOP to have a much more diverse support base than Mitt Romney’s [GOP] did in 2012. But that’s what happened,” Shor said.

Shor stressed that a shift to attracting wealthier white votes is more likely to move the Democratic Party further left.

“Highly educated people tend to have more ideologically coherent and extreme views than working-class ones,” he said, adding:

And since white voters are sorting on ideology more than nonwhite voters, we’ve ended up in a situation where white liberals are more left wing than black and Hispanic Democrats on pretty much every issue: taxes, health care, policing, and even on racial issues or various measures of ‘racial resentment.’ So as white liberals increasingly define the party’s image and messaging, that’s going to turn off nonwhite conservative Democrats and push them against us.