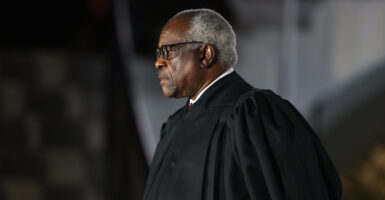 With the U.S. Supreme Court’s “baffling” refusal on Monday to grant review of the Pennsylvania election cases that had been appealed to the justices, the majority of the court is—to quote Justice Clarence Thomas’ dissent—“leav[ing] election law hidden beneath a shroud of doubt” and “invit[ing] further confusion and erosion of public confidence” in our elections.

Who can forget the chaos of this past election season? Attempts to change election rules and procedures began before any ballots had even been cast.

In some cases, state executive branch officials changed the rules; in others, judges made the changes. But under the U.S. Constitution, neither had the authority to do so.

Notable instances during and after the 2020 election where this procedure wasn’t followed occurred in Pennsylvania. There, the state’s Supreme Court ordered election officials to accept late-arriving mail-in ballots up to three days after Election Day and to count them even if they didn’t have a postmark showing they had been mailed by Election Day.

The authority the Pennsylvania court cited for overriding state law was what Thomas called a “vague clause” in the state’s constitution providing that elections “shall be free and equal.”

That was the ludicrous justification used by the state court.

The U.S. Supreme Court was asked to enjoin (or stop) the Pennsylvania Supreme Court’s ruling from taking effect, but the justices deadlocked 4-4 because Justice Ruth Bader Ginsburg died and Justice Amy Coney Barrett had not yet joined the court. Thus, the decision remained in place.

Later, the state Republican Party and others asked the high court to hear the cases on the merits, but to do so on an expedited basis. Again, the court declined—meaning, the cases proceeded according to the court’s normal procedures, which has now led to it declining to review the case at all.

Disappointingly, neither Justice Brett Kavanaugh nor Barrett joined them in getting the court to accept a very important case on a fundamental issue, as described by Alito, that could affect all future federal elections and has divided the lower courts; namely, “whether the Elections or Electors Clause of the United States Constitution … are violated when a state court holds that a state constitutional provision overrides a state statute governing the manner in which a federal election is to be conducted.”

They did not, of course, explain why. Should the issue arise again, as seems likely, perhaps Kavanaugh and Barrett will be less reticent to take up the issue then. One can only hope.

The election may be over, but Thomas pointed out that the court now had even more reason to hear this case because the 8th U.S. Circuit Court of Appeals had reached the opposite result from the Pennsylvania Supreme Court and had enjoined the Minnesota secretary of state from extending the ballot-receipt deadline that state’s Legislature had set.

Thomas made the commonsense point: “Unclear rules threaten to undermine [the electoral system]. They sow confusion and ultimately dampen confidence in the integrity and fairness of elections.”

That shouldn’t be controversial, but apparently it is.

Thomas went on to say:

An election system lacks clear rules when, as here, different officials dispute who has authority to set or change those rules. This kind of dispute brews confusion because voters may not know which rules to follow.

Even worse, with more than one system of rules in place, competing candidates might each declare victory under different sets of rules.

According to Thomas, the country was “fortunate that the Pennsylvania Supreme Court’s decision to change the receipt deadline for mail-in ballots does not appear to have changed the outcome in any federal election. … But we may not be so lucky next time.”

In fact, he pointed out that the Pennsylvania Supreme Court’s decision to change another rule did make a difference in a state election.

As Thomas said in his spirited dissent, “If state officials have the authority they have claimed, we need to make it clear. If not, we need to put an end to this practice now before the consequences become catastrophic.”

We also agree with Thomas that “[b]ecause the judicial system is not well suited to address these kinds of questions in the short time period available immediately after an election, [the court] ought to use available cases outside that truncated context to address these admittedly important questions.”

Alito agreed, saying that now that “the election is over,” there was “no reason for refusing to decide the important questions that these cases pose.”

These cases seemed to provide the perfect opportunity for the court to do so. Yet, it inexplicably declined the opportunity.

Thomas ended with a sharp rejoinder to his colleagues:

The decision to leave election law hidden beneath a shroud of doubt is baffling. By doing nothing, we invite further confusion and erosion of voter confidence.

Our fellow citizens deserve better and expect more of us. I respectfully dissent.

While we all hope Thomas’ words don’t prove to be prophetic, they may well be. By refusing to take these cases, the Supreme Court is—for the time being anyway—giving state government officials free rein to make unauthorized changes in election rules and to override election laws set by state legislatures.

Even if states set clear rules well in advance of their next elections by enacting commonsense reforms to protect the integrity of their electoral processes, those rules may be voided by partisan officials with no respect for the Constitution and the rule of law.