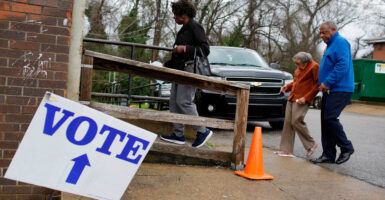 In the nearly five-month-long court battle involving a federal district court trying to prevent Alabama from enforcing state laws intended to safeguard the integrity of the voting process by requiring voters to present an ID when they vote as well as having a witness for absentee ballots, the latest developments occurred this week.

Fortunately, a three-judge panel of the 11th U.S. Circuit Court of Appeals has once again stayed (or dissolved) the judge’s order, although it allowed him to order the state not to prohibit curbside voting.

After a lawsuit was filed in May, federal district court Judge Abdul Kallon, an appointee of President Barack Obama, “ordered [non-enforcement of] the state’s de facto ban on curbside voting; suspended a photo ID requirement for voting absentee for those over 65 or those with a disability in [three Alabama] counties, and suspended a witness requirement in those counties.”

The three-judge panel affirmed his order, but the U.S. Supreme Court stayed it on an emergency appeal while the case was pending in the lower courts.

Kallon then proceeded to conduct a trial on the claims, and on Sept. 30, he issued his ruling.

He reissued his injunction prohibiting the state from enforcing its absentee ballot witness requirement for those with an underlying medical condition; its photo ID requirement for those over 65 or those under 65 who claim they can’t provide a copy of their photo ID with their absentee ballot due to a medical condition; and its de facto ban on curbside voting.

Curbside voting is when an individual drives up to a polling place and an election officials walks out to their car, gives them a ballot to mark, and then carries the ballot back inside to deposit in a ballot box. The voter never leaves his or her car, but the process compromises the secrecy of the voting process.

Kallon claimed that the “the Challenged Provisions violate the fundamental right to vote, the [Americans with Disabilities Act], and the [Voting Rights Act] as applied during the COVID-19 pandemic.” Therefore, the plaintiffs were entitled to an injunction prohibiting their enforcement “for the November 2020 general election.”

A divided three-judge panel of the 11th Circuit Court consisting of two Obama appointees and an appointee of President Donald Trump—the latter, Judge Barbara Lagoa—stayed Kallon’s order regarding the witness and photo ID requirements—meaning the state could enforce them—but declined to stay his order related to the state’s prohibition on curbside voting, meaning it could be allowed by local election officials despite state officials’ prohibition of it.

One of the Obama appointees, Judge Jill Pryor, would not have stayed any of Kallon’s orders. And Lagoa would have stayed all of his orders—including his prohibition on Alabama officials prohibiting curbside voting.

Trump recently included Lagoa on his short list of potential Supreme Court nominees, and she was rumored to be a finalist, along with 7th Circuit Court Judge Amy Coney Barrett, for the open Supreme Court seat vacated by the death of Justice Ruth Bader Ginsburg.

Alabama Secretary of State John Merrill described the stay of Kallon’s order as to the witness and photo ID requirements as a “win for the people of Alabama.”

However, he said that curbside voting—voting without entering a polling location—“undermines the integrity of the elections process and the ability for Alabamians to cast a secret ballot as the chain of custody is then broken.”

Merrill said the state “intends to appeal to the Supreme Court to see that this fraudulent practice is banned in Alabama, as it is not currently allowed by state law.”

While the 11th Circuit judges didn’t issue a written opinion providing rationales for their rulings, surely Kallon and Pryor have a different conception of the role of judges, one that ignores the Supreme Court’s admonitions against overreach by the federal judiciary into the election rules set by state legislatures so close to an election.

As we recently wrote when discussing the Supreme Court’s order staying another Obama-appointed judge’s attempt to prohibit South Carolina from enforcing its own absentee ballot witness requirement, Justice Brett Kavanaugh got it exactly right when he wrote in his concurrence:

First, the Constitution “principally entrusts the safety and the health of the people to the politically accountable officials of the States.” …

It follows that a State legislature’s decision either to keep or to make changes to election rules to address COVID-19 ordinarily “should not be subject to second-guessing by an ‘unelected federal judiciary,’ which lacks the background, competence, and expertise to assess public health and is not accountable to the people.”