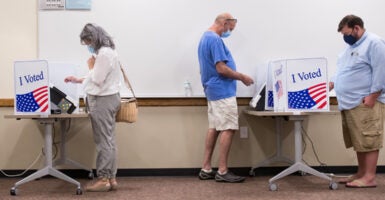 The high court dissolves a judge's order that would have prevented South Carolina from applying its requirement for a witness signature to absentee ballots. Pictured: Voters make their choices in early voting Tuesday at the Lexington County, South Carolina, elections office. (Photo: Sean Rayford/Getty Images)

The U.S. Supreme Court acted in the best interests of the voters of South Carolina on Monday by dissolving a preliminary injunction issued by a lower court.

The high court responded to an emergency appeal. The injunction from U.S. District Judge J. Michelle Childs, an Obama appointee, would have prevented South Carolina from applying its requirement for a witness signature to absentee ballots, a basic security protocol intended to deter fraud with absentee ballots.

The only explanation given for the Supreme Court’s stay in the short, two-page order in the case of Andino v. Middleton was a concurrence by Justice Brett Kavanaugh. In it, Kavanaugh pointed out two reasons for overturning the decision by Childs, which she had said was based on the dangers posed by COVID-19.

First, Kavanaugh said that the Constitution entrusts the safety and health of state’s residents principally to the “politically accountable officials” of that state.  Thus, he said, it follows that “a state Legislature’s decision either to keep or to make changes to election rules to address COVID-19” should “not be subject to second-guessing by an ‘unelected federal judiciary,’ which lacks the background, competence, and expertise to assess public health and is not accountable to the people.”

To support this proposition, Kavanaugh cited Chief Justice John Roberts’ statement earlier this year denying relief to a church from California’s onerous restrictions on religious liberty, making clear that what’s good for the goose is good for the gander.

Second, Kavanaugh made clear that “for many years, this Court has repeatedly emphasized that federal courts ordinarily should not alter state election rules in the period close to an election,” citing a 2006 precedent, Purcell v. Gonzalez.

In a not-so-subtle criticism of the lower court judge, Kavanaugh said that “by enjoining South Carolina’s witness requirement shortly before the election,” Childs “defied that principle and this Court’s precedents.”

The opinion by Childs actually already had been stayed by a three-judge panel of the 4th Circuit Court of Appeals in a 2-1 decision Sept. 24.  But a majority of the entire 4th Circuit overturned the panel decision the next day, granting en banc review (a review by all of the judges of the court), and reinstating the injunction.

The two judges on the original 4th Circuit panel who had dissolved Childs’ injunction, J. Harvie Wilkinson and Steven Agee, issued a stinging dissent pointing out that it represented “a stark interference with South Carolina’s electoral process right in the middle of the election season,” and that the plaintiffs who sued had “a legally unsupportable case.”

Wilkinson and Agee added that under Art. I, § 4, cl. 1, the “Constitution makes it clear that the principal responsibility for setting the ground rules for elections lies with the state legislatures.”  Thus, the Constitution “provides States–not unelected federal judges–the ability to choose among many permissible options when designing elections.”

Childs’s decision, they said, “upends this whole structure and turns its back upon our federalist system.”

Wilkinson, appointed by Ronald Reagan, and Agee, appointed by George W. Bush, also criticized their fellow judges on the 4th Circuit for reinstating Childs’ injunction, saying that their “disregard for the Supreme Court is palpable.”  The Supreme Court, they said, “has repeatedly cautioned us not to interfere with state election laws in the ‘weeks before an election.’”

Although Wilkinson and Agee said they “shared” the concerns about COVID-19’s “potential impact” on the election, the “pandemic does not give judges ‘a roving commission to rewrite state election codes.’”

In fact, requiring the signature of a witness on an absentee ballot is “commonplace and eminently sensible,” The two judges said it is “designed to combat voter fraud, a fight which ’the State indisputably has a compelling interest’ in winning.”

Wilkinson and Agee clearly were surprised by Childs’ suggestion, often repeated by the mainstream media, that South Carolina’s “interest in preventing voter fraud” was “not legitimate” because there is “an utter dearth of absentee voter fraud.”

Childs should try telling that to the voters of her neighboring state.  As Wilkinson and Agee pointed out in their dissent: “Just last year, the election in North Carolina’s 9th Congressional District was overturned on the basis of absentee ballot fraud.”

As explained by The Heritage Foundation in “Four Stolen Elections: The Vulnerabilities of Absentee and Mail-In Ballots,” one of the factors cited by the North Carolina State Board of Elections when it overturned that election was the forgery of witness signatures to hide the fraud.  The election, the board said, was “corrupted” by “concerted fraudulent activities related to absentee by-mail ballots.”

The voter fraud in North Carolina is just one of the cases in Heritage’s Election Fraud Database, which includes almost 1,300 proven cases of fraud across the country, many involving absentee ballots.

Childs ignored evidence of voter fraud presented by South Carolina, even though the state had no need to produce such evidence.

As Wilkinson and Agee correctly noted, South Carolina is “not required to produce evidence of voter fraud to demonstrate it has a legitimate interest in maintaining the integrity of its elections” since the Supreme Court “has repeatedly held that a State ’indisputably has a compelling interest’ in combatting voter fraud.”

The two dissenting judges also noted “all the areas in which law requires witnesses and notaries to inspire trust in official documents and acts and to convey their authenticity.”  Therefore, they wrote, it is “unsurprising that the courts of appeal have resisted overturning these laws,” citing cases from the 7th and 1st Circuits.

Wilkinson and Agee also said that all three branches of South Carolina’s government “have addressed whether absentee voters should be required to have a witness,” and all have answered in the affirmative.  Yet, they wrote, a federal district judge and the 4th Circuit had taken it upon themselves to overturn those decisions:

No member of our Court now holds elected office, much less an elected or appointed office of the State of South Carolina.  By substituting its own policy choice for that of the representatives of the Palmetto State, the district court’s injunction robs South Carolina of its sovereign prerogative to determine the rules for its elections.

The witness requirement is not a burden on voters even in the midst of COVID-19.  South Carolina produced testimony from the director of the infectious diseases division of the Medical University of South Carolina, who said that the witness requirement did not “pose a significant risk” because “it takes little time and can be done with facemasks, social distancing, and proper hygiene.”

Finally, Wilkinson and Agee pointed out a stark truth about the unprecedented number of lawsuits filed this year trying to overturn laws governing the election process and the danger they pose to the judiciary.  In concluding that the injunction was “not in the public interest,” they said it appears “more and more” that

political parties seem to be bringing these election law challenges in an effort to gain partisan advantage.  This trend is deeply disturbing.  Selective interventions by the courts in these cases will create the appearance of partisanship.  They undermine our most valued asset, the public’s trust and confidence in the judiciary.  They also create confusion and make it more difficult for the States to run their elections.

That admonishment is absolutely correct. And Wilkinson and Agee are also correct that their fellow judges should refrain from overstepping their roles, interfering in state sovereignty, and engaging in “judicially created confusion” by “changing voting rules shortly before elections.”