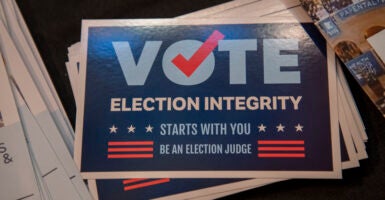 In St. Paul, Minnesota, this message adorns a table during a February rally in support of freedom and parental rights. (Photo: Michael Siluk/Universal Images Group/Getty Images)

The Public Interest Legal Foundation said it found the largest number of duplicate voter names in Hennepin County, where 334 names on the registration list appear to have two voter registration numbers despite having the same year of birth and address.

This was the most duplicate names of any county in Minnesota.

The law doesn’t allow for private lawsuits, but the legal foundation filed a complaint with the office of Minnesota Secretary of State Steve Simon, who oversees elections. His office is conducting the investigations.

Simon spokesperson Casandra Knudson confirmed in an email Wednesday to The Daily Signal that the Secretary of State’s Office “will be hearing the complaint.” But based on state law, she said, “we have no comment.”

Simon is a Democrat, or a member of the Democratic-Farmer-Labor Party, as it is called in Minnesota.

The Public Interest Legal Foundation’s complaint against Nicollet County says that four persons were registered twice under the same birthdate and address.

Someone using one duplicate name—that of a man convicted of sexually abusing a 13-year-old girl and making terrorist threats and then committed as mentally ill—voted twice in the 2020 election.

The legal foundation also filed a complaint against Dakota County, asserting that the county has 73 duplicate registrations.

The remaining three counties where the Public Interest Legal Foundation plans to file complaints are Olmsted, Todd, and Ramsey.

Under the Help America Vote Act, private organizations or individuals cannot sue a county for failing to abide by the law—in this case, doing list maintenance.

“There is no right of private action under HAVA,” J. Christian Adams, president of the Public Interest Legal Foundation, told The Daily Signal, referring to the federal law. “The only entity that can sue under HAVA is the DOJ [Department of Justice].”

This federal law is known mostly for allowing those getting a driver’s license to register to vote at the same time. But it also includes a provision requiring local jurisdictions to update their voter lists to delete the names of ineligible voters, such as a dead person, someone who moved out of the jurisdiction, or in the case of a duplicate name.

The five other states exempted under the 1993 law are New Hampshire, Wisconsin, Idaho, Wyoming, and North Dakota.

Adams said he didn’t know yet whether his legal foundation would bring action in those five states.