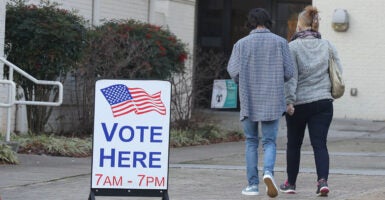 A sign is seen at a polling station in Marietta, Georgia, Jan. 5, 2021, where voters are casting ballots for U.S. Senate candidates in two runoffs. (Photo: Xinhua/Getty Images)

State Sen. Roby Smith, a Republican, says the new law “enhances Iowans’ confidence in the elections in this state by implementing common sense reforms like providing a defined deadline on receipt of absentee ballots, aligning poll closing times for all Iowa elections closer to its bordering states, and bringing the absentee and early vote windows closer to the national average.”

“These reforms continue to make it easy to vote, but hard to cheat in Iowa elections,” Smith, an author of the bill and chair of the Senate State Government Committee, added in a statement provided to The Daily Signal.

“In order for our republic to maintain the consent of the governed, they must have confidence in our election system,” Smith says.

In a statement released Monday, Reynolds said the new law will give “Iowans even greater confidence to cast their ballot” and it will promote “more transparency and accountability.”

“It’s our duty and responsibility to protect the integrity of every election,” Reynolds said, adding: “This legislation strengthens uniformity by providing Iowa’s election officials with consistent parameters for Election Day, absentee voting, database maintenance, as well as a clear appeals process for local county auditors.”

The new law has polls close an hour earlier, 8 p.m. instead of 9 p.m., and sets the deadline 5 p.m. for voter registration, 15 days before each election. The law also gives voters 70 days prior to an election to request an absentee ballot instead of 120 days.

Prior to this new legislation, “ballots placed in the mail the day before Election Day could be counted as long as they arrived by noon the following Monday.”

State Rep. Bobby Kaufmann, who ran the legislation on the House side, told The Daily Signal that ensuring election integrity is an issue of evergreen importance.

“It’s imperative that we maintain the integrity of our elections,” Kaufmann said.

“We have a strong election system here in Iowa, but the 2020 election showed us many ways it can be improved,” he added. “This legislation aimed to ensure there is uniformity of election procedures throughout the state, make sure our county auditors are following the law, and maintain voter databases. With this law, Iowa continues to set an example for the rest of the country.”

Iowa Republican Party Chairman Jeff Kaufmann praised the legislation in a statement following the signing of the bill.

“While our election systems were already strong, this bill improves upon the work Republicans did in 2017 when they passed voter ID laws,” Kaufmann said. “The 2020 election showed us where shortfalls in our system existed and Iowa Republicans created solutions targeted at fixing those shortfalls.”

Jessica Anderson, executive director of Heritage Action for America, said in a statement provided to The Daily Signal that Iowa is leading the way for election integrity.

“Iowa’s election integrity bills are the first major bills passed this year to secure and strengthen elections at the state level,” Anderson said.

“Iowa’s bill contains a number of strong reforms to ensure every Iowan can have confidence their vote will be protected—the legislature and Gov. Reynolds should be proud and applauded by all Americans.”