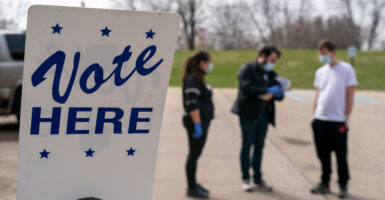 An activist judge has twice tried to exceed his judicial authority by attempting to change electoral rules close to an election date. Pictured: Poll workers stand outside a curbside voting area in Madison, Wisconsin, on April 7, a day after the Supreme Court voted against an extension of an absentee ballot deadline in the state. (Photo: Andy Manis/Getty Images)

Many federal district court judges have an expansive view of their authority—which far too often ignores Supreme Court precedent.

Judge William Conley, a federal district court judge who was appointed by President Barack Obama, certainly seems to have an expansive view of his, as made evident by some election-related orders he gave that clearly surpass the appropriate power of a district court judge.

Fortunately for the voters of Wisconsin and their interests in the integrity of the election process, some members of the 7th U.S. Circuit Court of Appeals were having none of it, and stayed all of Conley’s election-related orders on Oct. 8.

As explained by the majority in its “per curiam” (meaning unsigned) opinion, Conley “extended the deadline for online and mail-in [voter] registration from Oct. 14 to Oct. 21, 2020; enjoined for one week (Oct. 22 to Oct. 29) enforcement of the requirement that the clerk mail all ballots, but only for those voters who timely requested an absentee ballot but did not receive one, and authorized online delivery during this time; and extended the deadline for the receipt of mailed ballots from Nov. 3 (Election Day) to Nov. 9, provided that the ballots are postmarked on or before Nov. 3,” among other changes.

After determining that the Wisconsin state Legislature had the authority to intervene to defend the state’s laws against the lawsuit filed by, among others, the Democratic National Committee, the 7th Circuit Court panel addressed the legislators’ two principal arguments in support of a stay:

First, that a federal court should not change the rules so close to an election; [and] second, that political rather than judicial officials are entitled to decide when a pandemic justifies changes to rules that are otherwise valid.

Two of the three judges on the panel voted to issue a stay, saying, “We agree with both of those arguments.”

But they went further, noting that this wasn’t the first time Conley had ordered changes so close to an election.

He had ordered changes in the lead-up to Wisconsin’s April 2020 primary election, and “the Supreme Court granted a stay (to the extent one had been requested) and observed that the change had come too late.”

The panel made clear that “for many years, the Supreme Court has insisted that federal courts not change electoral rules close to an election date.”

It noted that the justices have “not forbidden all changes close to an election. A last-minute event may require a last-minute reaction. But it is not possible to describe COVID-19 as a last-minute event.” This is especially true since Wisconsin has already conducted two elections—one in April and one in August—during the pandemic.

More importantly, though, “The district judge also assumed that the design of adjustments during a pandemic is a judicial task. This is doubtful, as Justice [Brett] Kavanaugh observed in connection with the Supreme Court’s recent stay of another injunction issued close to the upcoming election … The Supreme Court has held that the design of electoral procedures is a legislative task.”

Moreover, said the majority, “The problem that concerned the district judge … was the difficulty that could be encountered by voters who do not plan ahead and wait until the last day that state law allows for certain steps. Yet, as the Supreme Court observed last April in this very case, voters who wait until the last minute face problems with or without a pandemic.”

The 7th Circuit Court emphasized, as had happened before in an election-related case before Conley, that “The Court has consistently stayed orders by which federal judges have used COVID-19 as a reason to displace the decision of the policymaking branches of government.”

The dissenting judge adopted Conley’s same activist and overbroad view of federal judges’ power, stating, hyperbolically, “This is a travesty.”

She claimed that the majority was adopting “a hands-off approach to election governance that elevates legislative prerogative over a citizen’s fundamental right to vote.”

She failed to acknowledge that the Constitution gives state legislators the authority to determine what rules govern the election process, including during a pandemic, not unelected federal judges.

She also ignored the practical problem that changing the rules just before an election will cause chaos and confusion for both voters and election officials.

She ended her opinion by saying, “Good luck and G-d bless, Wisconsin. You are going to need it.”

Actually, what Wisconsin voters—and all of us—need are judges who don’t usurp the authority of elected officials and who approach their judicial task with humility, understanding their proper role in our system of government. Thankfully, at least two judges on the 7th Circuit Court did just that.