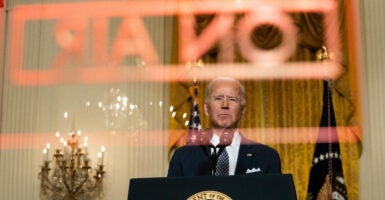 President Joe Biden delivers remarks from the White House to a virtual event hosted by the Munich Security Conference on Feb. 19. That same day, Biden also took part in a videoconference of the Group of Seven. (Photo: Anna Moneymaker/Getty Images)

President Joe Biden spoke to a hastily thrown together virtual meeting of the Group of Seven last week.

Given the short duration of Friday’s summit and its lack of any real substance, it seemed to have been organized for the sole purpose of giving the new president a platform from which to proclaim to the world that “America is back.”

As if America ever left.

The biggest concern that emerged from the brief confab, though, was the lack of any in-depth focus by the leading Western democracies on the rising threat from communist China.

G-7 coordination on the fight against COVID-19 was a priority on the agenda—as it should have been. However, Biden made no demands for reform of the World Health Organization, even as he pledged $4 billion to the WHO for vaccines for other countries—at a time when only 20% of Americans have been vaccinated.

Neither did the president press the other leaders to insist on a thorough, top-to-bottom reform of the U.N. body, whose grave early mistakes worsened the pandemic. The G-7 made only a tepid and vague observation that the WHO should be strengthened.

But again, of greater concern was the failure of the president to rally the G-7 to take a firmer stance against China.

The Heritage Foundation has made a series of recommendations of actions that the G-7 nations should take in solidarity to confront Beijing. They went largely unaddressed by the heads of state in their final communique.

The same day as the G-7 summit, Biden managed to squeeze in an appearance at a special meeting of the Munich Security Conference. In his address, the president again boasted that “America is back” in NATO and the transatlantic alliance.

Although he called for U.S. allies to unite in the face of “long-term strategic competition with China,” neither France nor Germany expressed much enthusiasm for confronting the communist nation.

Other observers also took note of Biden’s failure “to pit allies against China.”

The president should continue to push the G-7 to join the U.S. in standing firm against China’s aggressive mercantilism and its many ongoing efforts to exploit the pandemic and otherwise undermine the economic and political health of Western market democracies.

American leadership of the G-7 and NATO are more vital now than at any time since the end of the Cold War. As the leader of the world’s only superpower, Biden should be urging America’s allies to resist and reject China’s attempts to weaken their shared foundations of economic liberty and freedom.

Unfortunately, in his maiden speeches last week, the president’s performance would have to be graded as a “C” for only a middling effort to achieve those goals.