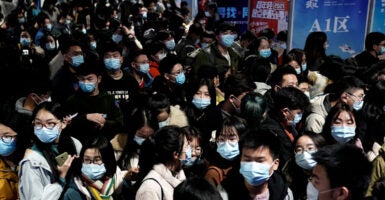 “This is not about finding a guilty country or a guilty authority,” German scientist Fabian Leendertz says. Pictured: A job fair attracts a crowd Dec. 2 at the Hongshan Gymnasium in Wuhan, China. (Photo: Getty Images)

A team of scientists leading a World Health Organization mission to China to investigate the origins of the novel coronavirus isn’t looking to assign guilt to the communist regime over its failure to prevent the pandemic, a member of the delegation says.

“This is not about finding a guilty country or a guilty authority,” Fabian Leendertz, a scientist at the Robert Koch Institute, Germany’s infectious disease agency, told the French media outlet Agence France-Presse.

“This is about understanding what happened to avoid that in the future, to reduce the risk,” Leendertz said.

Leendertz and a team of 10 other scientists will visit the Chinese city of Wuhan in January to investigate how the virus jumped from animals to humans, according to Agence France-Presse.

Most scientists believe that the virus moved from an animal to a human at one of Wuhan’s open-air food markets. Western health officials long have criticized the Chinese government for doing little to regulate the food markets, which can be breeding grounds for viruses such as the new coronavirus, which causes the disease COVID-19.

Health officials in the U.S. have accused the World Health Organization of failing to confront Chinese leaders for withholding information about the coronavirus early in the pandemic.

Citing Chinese officials, the WHO said in a statement almost a year ago that there was no evidence that the virus spread by person-to-person contact:

That assurance, soon after known to be false, likely slowed the response of health officials outside China at a crucial point in the pandemic.

Bruce Aylward, a WHO official who led a fact-finding mission to China in February, claimed, based on information obtained by local health officials, that the coronavirus likely wasn’t transmitted easily by asymptomatic carriers.