How to Restore Faith in Our Federal Elections 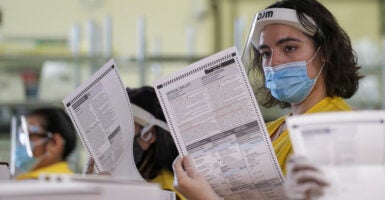 Ballots are checked before being sent in for counting at the San Bernardino County Registrar of Voters Office Nov. 5, 2020, in California. (Photo: Irfan Khan/Los Angeles Times/Getty Images)

True democracy hinges on the integrity of the election process. Without the assurance that all legal votes are counted—and all illegal votes are weeded out—trust in our government dissipates.

Unfortunately, Americans’ faith in the integrity of our electoral process is eroding—and with good reason. Election fraud is all too real, as proved by the more than 1,300 cases cited in The Heritage Foundation’s Election Fraud Database.

Moreover, errors and omissions by election officials, shoddy election procedures, and inadequate training have undermined the process as well.

But it doesn’t have to be this way. Here are five things states can do—and two things they should stop doing—to restore faith in the accuracy of our elections.

States should stop allowing same-day registration for voting and make automatic voter registration a thing of the past.

Same-day registration doesn’t give election officials enough time to verify the information on a registration form and confirm the registrant’s eligibility to vote. And no one should be automatically registered without being asked if they want to do so.

Registering people without their consent or knowledge can lead to multiple registrations by the same individual, as well as the registration of noncitizens and others ineligible to vote.

As for what states should be doing, here are five best practices state lawmakers should adopt for elections:

Clean up the voter rolls. Computerized statewide voter registration lists should be interoperable, allowing them to communicate seamlessly with other state record databases, exchanging and comparing information frequently.

For example, when someone changes the residence address on his or her driver’s license, that updated information should be sent to state elections officials so that the individual’s voter registration address reflects the move.

Verify citizenship. By law, only U.S. citizens can vote in our federal elections. States should, therefore, require proof of citizenship to register to vote. Elections officials should also verify citizenship against the records of the Department of Homeland Security, using the E-Verify system.

Require voter ID. Whether voting in-person or by absentee ballot, those wishing to cast a ballot should be required to present a government-issued photo ID to show they are who they say they are. States such as Alabama, Kansas, and Wisconsin already do so.

Of course, states should issue suitable IDs for free to those who are eligible to vote and do not have a driver’s license or some other suitable form of identification.

Limit mail-in ballots. Mail-in ballots are vulnerable to being altered, stolen, or forged. Last year, a New Jersey judge had to invalidate an all-by-mail city council election due to “procedural violations.”

Mail-in ballots also are far more likely to be tossed out than are votes cast in person. In the Paterson, New Jersey, case, elections officials rejected 1 in 5 ballots for everything from signatures on the ballots not matching voters’ signatures on file to ballots not complying with technical rules that apply to absentee ballots.

New York, which took more than a month to count ballots from last year’s primary elections, reported a similar rejection rate. This should be considered unacceptable by anyone believing in fair and accurate elections.

It’s a risky business, and has led unscrupulous political operatives to pick up and “lose” or change absentee ballots. Others have been known to coerce at-home voters into voting “their way” or to simply fill out the ballots for them.

These kinds of abuses are made possible by the fact that elections officials have no way to supervise who’s doing what with mail-in ballots.

For democracy to survive and thrive, it’s crucial that every legitimate vote be counted and not diluted by election fraud and other problems. It’s time for states to implement these reforms to shore up the people’s trust in our elections.