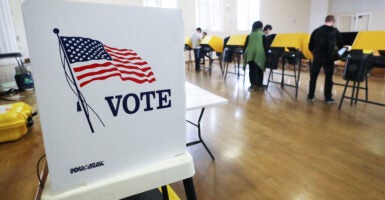 One of the plaintiffs, a Yale graduate student, was asked in a deposition to explain why returning his ballot was difficult. He explained it was a 30-minute walk to his nearest post office. He was then asked if he knew of Google and if he had used it to look for a closer mailbox. He stated that he had not used Google or done any other research to find closer mailboxes. The student was unaware of the USPS mailbox six blocks away from his apartment or that he could use the mailbox at his apartment complex.

This disastrous deposition could have been the reason the Democrats gave up on the case, walking away before the trial even began.

Such a comprehensive failure in a single instance would be embarrassing enough. However, this kind of floundering isn’t an isolated event for those Democrats engaged in dishonest attacks on election integrity. Failure is a pattern.

The COVID-19 pandemic breathed new life into the Democrat voting offensive that before the crisis seemed out of ideas. Their showcase voting “rights” litigation pre-pandemic was an unsuccessful and petty attack on state rules for the order in which candidates appear on the ballot.

Bad actors on the left leveraged the pandemic in order to attack established voting processes. The cynicism in these theatrics is matched only by their ineffectiveness: Despite using COVID-19 as a pretense to launch a nationwide attack on our election laws, Republican-led litigation efforts largely blunted their assault.

Democrats struck out completely in Arizona, Florida, Iowa, Maine, Michigan, New Hampshire, Ohio, South Carolina, and Wisconsin. Judges of all stripes rightfully saw through the cynical and speculative nature of the Democrats’ claims.

Democrats are simply unable to prove that election integrity laws make voting harder. Consider their challenge to Arizona’s ballot harvesting ban, where the Democratic National Committee was unable to show that the ban stopped even a single person from voting.

While Arizona’s law is currently under consideration by the Supreme Court, almost every court has seen through the charade and upheld similar bans. A recent Democrat challenge to Michigan’s absentee application harvesting ban failed miserably, with the court noting the “plaintiffs ha[d] not come forward with evidence that any voters” had been impacted by the ban.

The same goes for the Democrats’ challenges to voter ID laws, as demonstrated by their lawsuit against Virginia’s photo ID requirement (which the Democrats there have since regrettably repealed). There, the court found that “none of the voter witnesses” provided by the Democrats “was actually denied his or her right to vote.”?

The trend is clear: Democrat lawsuits are all “style” and no substance. Their theatrics wilt under scrutiny because they have no substantive reason for attacking election integrity other than cheap political gain.

With their track record of failure, the only conclusion is that their efforts are merely for show and their “claims” are lies. These unsuccessful lawsuits have real world consequences.

First, the mainstream media amplifies Democratic lies, misleading the public even though most Americans support stronger election integrity measures that protect the security of their ballots.

Second, even nonpartisan election lawyers have complained that Democrats’ litigious theatrics are counterproductive and risk evisceration of voting rights laws. While Republicans may frequently disagree with these lawyers on voting issues, it’s a legitimate point. They fear, like the boy who cried wolf, that Democratic scaremongering may lead courts to overlook legitimate voting rights claims.

Fortunately, citizens and courts alike can see through the Democratic charade, rendering their attacks on our democratic system a master class in failure.