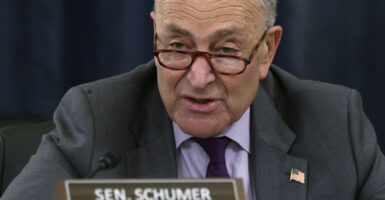 "The answer, Sen. Schumer, is that the United States is not a democracy; we are a constitutional republic," California resident Mark Simmons writes about Democrats' legislation to nationalize elections. Pictured: Majority Leader Chuck Schumer, D-N.Y., speaks during a March 24 hearing where he asked Republicans why they are "so afraid of democracy." (Photo: Alex Wong/Getty Images)

Editor’s note: The Daily Signal’s audience is skeptical to say the least about Democrats’ proposals to “expand voting rights” rather than make sure our elections are secure. Here’s what we found in the mailbag at letters@dailysignal.com.—Ken McIntyre

Dear Daily Signal: Those who support HR 1 and its Senate counterpart, S 1, should be removed from their seats in Congress for violating the oath of office (“9 Highlights From Senate Hearing on Federal Takeover of Elections”).

This legislation is an obvious attempt to violate the Constitution and turn the country into an autocracy. The Constitution clearly states that the responsibility of federal elections is to remain in the hands of the states.

I do agree with minimum standards for uniform ballot design, the use only of approved voting equipment, voter ID, uniform application processes for mail-in ballot requests, counting procedures, and a ban on ballot harvesting nationwide should be set out to assure that all elections for federal office are handled in an unbiased and fair manner.

This bill does the exact opposite by attempting to use a “back door” approach to eradicate portions of the Constitution.—Jeff Savlov

Dear Daily Signal: Fred Lucas reports that Senate Majority Leader Chuck Schumer demanded at one point in the hearing on S 1 Democrats’ election legislation (“9 Highlights From Senate Hearing on Federal Takeover of Elections”): “I would like to ask my Republican colleagues, why are you so afraid of democracy?”

I’d like to take a crack at that. The answer, Sen. Schumer, is that the United States is not a democracy; we are a constitutional republic. The fact that you don’t know that makes you dangerous and wholly unqualified to serve as a lawmaker.

The framers of our Constitution explicitly rejected democracy as our form of government. They recognized democracy amounted to mob rule where no one’s rights could be secured.  One group could discriminate against another based on having one more vote.

I note that you, Sen. Schumer, exemplify all that is wrong with that form of governance. You apparently believe government’s power has no bounds so long as you can muster the votes. You ignore the Constitution and states’ rights, just as you are doing with this bill.—Mark Simmons, San Jose, Calif.

We only will be able to inject sanity into the current government spending spree through the ballot box if Congress doesn’t pass HR 1. The Democrat socialists knew enough to make stealing future elections their No. 1 priority.—Kathy Vanderford, Fountain Inn, S.C.

About Chuck Schumer’s statement that he would like to ask Republicans why they are afraid of democracy: We need to tell him and all the other anti-American elected officials that it isn’t a democratic republic we are afraid of, but socialism and communism.—Amanda Woodbury

Dear Daily Signal: It is almost hilarious to me every time some Democrat rails about the Jim Crow era. I have to wonder why Republicans don’t stand up and remind everyone that the Jim Crow era was the Democrats’ doing. The Democrats ran the South from the end of Reconstruction until the 1964 Voting Rights Act, which Democrats filibustered.

Voter suppression, school segregation, the White Citizens Councils, the Ku Klux Klan—all brought to us by southern Democrats while their northern cohorts silently applauded. As far as I’m concerned, anything the Democrats put forward on “voting rights” is a fraud on its face. They are not interested in the freedom to vote, only in holding on to power.

Ballot harvesting should be illegal. The vote is a serious obligation; people can make it to the polls or vote by absentee ballot. Those who do neither should not be pandered to.

Our Lord created the world in six days. Surely Congress can write a bill in six pages. As with the Affordable Care Act, the length of HR 1/S 1 is intended only to prevent serious examination.—Morgan Spector, Lancaster, Calif.

We have a republic to ensure the minority has a voice. All the special classes the Democrats are now supporting need to look at other examples of democracies turning on their own (for example, Socrates in ancient Greece).

Why do the Democrats fear a republic? The bills HR 1 and S 1 are nothing more than an unconstitutional power grab. The election process belongs to the states and must remain so. Let’s not depend on the courts to defeat this blatant power play.—Kathryn Vanderford, Fountain Inn, S.C.

Dear Daily Signal: The article by Fred Lucas regarding the settlement with the state of Pennsylvania to remove dead voters from the voter registration rolls is fine as far as it goes “Pennsylvania Agrees to Exhume Dead From Its Voter Rolls”). Unfortunately, this addresses only the symptom, not the disease.

There are several “disease” issues:

1. Those state employees who are responsible for keeping the voter rolls accurate need to be fired, so that a clear message is sent to those wishing to vote fraudulently in the future.

2. The underlying issue is: Who cast those ballots? The persons casting “cadaver ballots” are invested in fraud and gaming the system, and need to be prosecuted.

Since the essence of disallowing dead people to vote as well as saving democracy can be found already addressed in the Constitution, it is up to the individual states to fix whatever problems exist in their respective election practices.—Hobie Smith

Dear Daily Signal: In response to Fred Lucas’ story on outside funding of elections in Arizona (“Election ‘Safety’ Grants May Have Swung Arizona to Biden, Report Finds”): Our voting district in California had in-person facilities available. They were underwhelmed. I went to one that had been a Levi’s outlet. It was spacious, with multiple voting stations.

It took me about 10 minutes from arrival to leaving. Smooth and simple. So why was it so hard to figure out how to handle in-person voting elsewhere? I would say it was not, but a manufactured issue, like so much of what we get from the left.

My wife and I just went to get our COVID-19 vaccinations at the local fairgrounds. Again, a large number of people were there. but they went through lines readily and there were multiple inoculation stations (about half in use).

To get the shot you had to provide ID. So if you need ID to get a vaccination, why is it racist to require an ID to vote?

The left is great at manufacturing issues to yell and scream about, but completely lost when it comes to solutions. Always has been.—Morgan Spector, Lancaster, Calif.

So we now have privately funded elections? What could go wrong?—Rick Ashton

That represents a manifestation of the problems we have understanding what government should be and do. No government entity has any need, nor any right, to “do voter outreach.”

Government should hold elections, informing the citizenry of voting requirements and locations. Nothing more, not doing “voter outreach.”—Jerome Waldemar

Dear Daily Signal: I live in the Green Bay, Wisconsin, area and recently “attended” the city board meeting, which was in a Zoom format. The mayor of Green Bay and the city attorney were present. They denied all the claims in M.D. Kittle’s articles about how the Nov. 3 election was conducted (“Democrat Operative Got Secret Internet Connection at Wisconsin Election Center, Emails Show”).

I do not doubt for one minute that this election was rigged. I have read about almost every case in the related states. I continue to follow voter cases in Georgia, Arizona, and Michigan.

I want to know how I can get involved. This is a not a Democrat or Republican issue; this is a violation of our right to have a voice. I am not alone. I have many friends who feel the same. We just do not know where to go or how to help.—Dawn McCole, Wisconsin

In his article “Biden Campaign Lawyers, Democrats Advised Green Bay on Election Procedures,” M.D. Kittle writes: “That was just a bit hyperbolic. Green Bay’s population is just over 100,000, with some 60,000 registered to vote in November’s election.”

Maybe not. Perhaps the plan in Wisconsin was to have hundreds of thousands of “voters,” once they found out how many they’d need. You know, following the Pennsylvania and Georgia models.—Tim Kern, Anderson, Ind.

About M.D. Kittle’s report out of Wisconsin (“Green Bay Residents File Complaint, Saying City Allowed ‘Activist Groups to Control’ 2020 Election”): How ironic. Most of the corruption in the presidential election has been known since the election. Yet nowhere was there any government official willing to pursue this.

Now President Trump is gone and the communists are in control. We can talk about it and do absolutely nothing to the perpetrators.—Pete Noffke, Bonney Lake, Wash.

It frustrates me to no end that election meddling is being investigated to “prevent future meddling.” That’s great, but also prosecute and correct any inaccurate election results from the past election. If a thief steals your car, does he go to jail and get to keep your car?—Steven Mettler

Where is the district attorney or attorney general on this election situation in Wisconsin?

Why are we allowing this to be ignored? We’re just going to look the other way as if it didn’t happen?—Clark Dunklin, Dallas