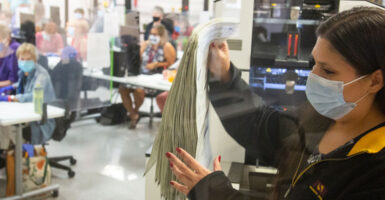 Money from the founder of Facebook touted as being for safe elections during the pandemic may have affected the outcome of the presidential race in Arizona by driving up Democrat turnout, according to a government watchdog report.

The grant from Facebook CEO Mark Zuckerberg and his wife Priscilla Chan focused more on “voter education” than personal protective equipment to guard against COVID-19, the report says.

The Zuckerbergs gave a total of $350 million to the Center for Tech and Civic Life, a left-leaning technology group, that in turn issued grants to 2,500 election offices in 49 states.

The spending included $5 million for Arizona, according to preliminary data by the Foundation for Government Accountability, the watchdog group.

Arizona turned out to be one of the most pivotal states in Democratic nominee Joe Biden’s election upset of President Donald Trump.

About 60% of Arizona’s 15 counties received the Zuckerberg grants, but more than half of the money—$2.9 million—went to Maricopa County, the state’s largest jurisdiction and also the fourth-most populous U.S. county, according to the Foundation for Government Accountability report.

Biden won five of the state’s 15 counties Nov. 3. In four of the Biden-carried counties that received the grants, the number of Democratic voters increased by 36% or more.

“The county initially budgeted about $17 million for the general election, which was approved by the [county] Board of Supervisors in 2019, well before the COVID-19 pandemic,” Gilbertson told The Daily Signal in an email. “The county used four grants to fund projects and services beyond the baseline budget: CARES funding from the federal government, AZVoteSafe funding from the Arizona governor’s office, and two grants from non-profit organizations.”

Much of the added costs were for PPE [personal protective equipment], renting large locations to serve as polling locations, and overtime costs for poll workers who worked up to three weeks.

While the grant funding helped to offset the cost to taxpayers, it’s important to note that the county’s election plans were solidified well before the grants were awarded.

Maricopa County narrowly went for Trump in 2016 over Democrat Hillary Clinton, then went for Biden over Trump in 2020 by a significant amount.

“Trump was able to increase his vote total by almost 250,000 votes [in Maricopa County], but miraculously, Biden was able to exceed Clinton’s performance by 337,000 or so,” Trevor Carlsen, senior research fellow for the Foundation for Government Accountability, told The Daily Signal in a phone interview. “That was enough to make up the difference.”

Maricopa is a swing county, while the four other counties were Democratic counties. The report looks only at these counties that went for Biden.

By contrast, Santa Cruz County, a Democratic-leaning county that didn’t get grant money, had only a 12% increase in turnout by Democrats—about one-third of the increase in other counties.

“It’s an interesting comparison when you look at the five counties, four of which got the money and one that didn’t, how Democratic turnout fared,” Carlsen said.

A spokesperson for the Center for Tech and Civic Life did not respond to phone and email messages from The Daily Signal last week or before publication this week.

The CTCL website says the $350 million in grants went to 2,500 U.S. election offices in 49 states to “operationalize safe and secure elections.” It says the grants helped to recruit and train poll workers for safe, in-person voting and election officials who “proactively invited more people to vote by mail” and who “adjusted policies, procedures, and resources to manage an increase in mail ballots.”

Beyond the Zuckerbergs, the Center for Tech and Civic Life mostly is funded by left-of-center donors such as the Democracy Fund, the John S. and James L. Knight Foundation, and the Rockefeller Brothers Foundation, according to the Washington-based Capital Research Center, which tracks nonprofits.

The CTCL was founded in 2012 by Tiana Epps-Johnson, Donny Bridges and Whitney May, who previously worked together at the New Organizing Institute, which The Washington Post referred to as “the Democratic Party’s Hogwarts of digital wizardry.”

The report by the Foundation for Government Accountability notes that “funds were largely requested for get-out-the-vote efforts, influenced voter turnout in favor of Democrats, and may have impacted the results of the election in some states—including in the critical swing state of Arizona.”

The report refers to the money from the Zuckerbergs as “Zuckerbucks.”

“On average, counties that received Zuckerbucks saw the Democratic presidential candidate’s share of the vote increase compared to the 2016 election,” the report says, adding:

For example, in Maricopa County, the only county in the state to flip in the 2020 election, President Trump increased his vote total by more than 248,000 votes yet lost the county to Biden. In 2020, Biden improved on Hillary Clinton’s 2016 vote total in the county by more than 337,000 votes. This nearly 90,000-vote difference cannot be explained by registration increases.

While Democratic voter registration in Maricopa County has grown more than Republican registration since the 2016 election, the net increase was fewer than 50,000 votes and registered Republicans still outnumber registered Democrats by more than 100,000 voters. In counties that went for Biden in 2020, Zuckerbucks seem to have helped boost Democratic turnout.

The Center for Tech and Civic Life gave grants to five of the 10 Arizona counties that Trump won, according to separate research from Capital Research Center. These five Trump counties accounted for about 11% of the state’s vote.

In counties that got the grants, the nonprofit watchdog said, Biden increased voter share over Clinton in 2016 by 81%, or 694,469 votes.

In a comparison among jurisdictions that got the Zuckerberg grants, the report says, Apache County saw a 36% increase in voter participation from 2016 to 2020; Coconino saw a 38% increase; and Pima County a 36% increase.

Facebook did not respond to email inquiries about the grants made possible by its founder and his wife.

A spokesperson for Chan’s “family office” referred to an October statement from Mark Zuckerberg posted on Facebook that said:

Between Covid and insufficient public funding for elections, there are unprecedented challenges for election officials working to make sure everyone can vote safely this year. …

To be clear, I agree with those who say that government should have provided these funds, not private citizens. I hope that for future elections the government provides adequate funding. But absent that funding, I think it’s critical that this urgent need is met.

The report from the Foundation for Government Accountability contends that much of the money sent to Arizona went to “voter education” and other purposes that weren’t related to COVID-19:

For example, while a memorandum to the Coconino Board of Supervisors says the grant will be used to ‘supplement election work recruitment and training, and other security and safety measures,’ it does so only after first pointing out that the grant provides ‘additional capacity to increase voter education efforts.’ Other election jurisdictions spent absolutely nothing on PPE and COVID-19-related items whatsoever.

The Foundation for Government Accountability has looked at grants in Florida and Iowa as well as Arizona, and the COVID-19 argument doesn’t entirely stand up with how the grants were used, the foundation’s Carlsen told The Daily Signal.

“His defense was that this is a special case because of COVID-19, which circles back to one of the points that we made in the Florida brief and there is inclusion of that in our [Arizona] brief here,” Carlsen said of Zuckerberg.

“If it’s for COVID-19 specifically, one would think the money would be spent accordingly and there is evidence to suggest that PPE [personal protective equipment] was only a portion of how the funds were eventually spent,”  Carlsen said. “And there were things that seemingly were not efforts to protect against the spread of COVID-19, [indicating] that the money was spent beyond that initial scope.”