Why Arizona Looks Like Ground Zero in Battle Over Election Integrity 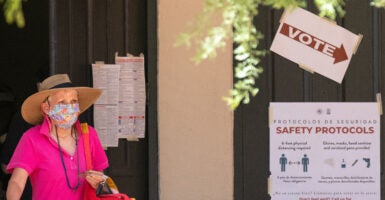 Brnovich has pushed back against the top election official in Arizona, a state that is shaping up to be ground zero in a battle over election integrity this fall.

Arizona Secretary of State Katie Hobbs, a Democrat, has called for Brnovich’s office to open a criminal investigation into whether President Donald Trump’s opposition to more funding for the U.S. Postal Service is illegal, especially combined with controversial cost-cutting measures at the USPS.

In a letter to the Arizona Attorney General’s Office, Hobbs wrote that state law makes it a crime to “knowingly delay the delivery of a ballot.”

This was only the most recent charge, as the Democratic Association of Secretaries of State and Center for American Progress Action already had issued a joint report accusing Republicans of launching a vast voter-suppression campaign.

At the Democratic National Convention held Aug. 17 through 20, top state election officials charged that Republicans sought to suppress the voting rights of young people, women, and minorities—but were not specific on how.

“Anytime you have a statewide election official that claims to be a trusted source or claims to be an honest broker of information when they are peddling unfounded accusations or conspiracy theories, I think that’s dangerous because it undermines people’s confidence and faith in our institutions,” Brnovich, a Republican, told The Daily Signal.

Arizona is not only a battleground state, but many politicos are watching the state because of its pending Supreme Court case over ballot harvesting.

Ballot harvesting allows third parties–such as political operatives and campaign officials—to collect absentee and mail-in ballots. Although ballot harvesting has been known for corruption for a long time, it takes on more gravity in a year where the COVID-19 pandemic is expected to produce a surge of mail-in voting.

As Arizona’s secretary of state, Hobbs has the responsibility of defending state election laws, but declined to do so, so the Attorney General’s Office had to step in and defend Arizona’s ban on ballot harvesting, Brnovich said.

In her Aug. 14 letter to the attorney general, Hobbs says: “The timing of such changes—just months before a major election in which a record number of people are expected to rely on USPS when exercising their fundamental right to vote—would be conspicuous on its own.”

U.S. Postmaster General Louis DeJoy announced Monday on Capitol Hill that he didn’t order measures such as a freeze in overtime pay, and he canceled the implementation of all changes at least until after the election. He said the USPS would prioritize ballots in delivery.

In her letter to Brnovich, Hobbs also said Trump’s opposition to to a proposed $25 billion bailout for the Postal Service raises suspicion:

President Trump’s most recent comment, on August 13th, leaves any reasonable person with the inescapable conclusion that recent directives at the USPS are part of a larger, coordinated scheme to interfere with Americans’, including Arizonans’, ability to vote safely by mail. The President explicitly admitted to an intentional effort to interfere with USPS’ ability to deliver ballots by mail.

The state attorney general’s chief of staff, Joseph Kanefield, an election law expert, wrote back to Hobbs on Aug. 19, asserting there was no evidence that ballots are being delayed in Arizona to start an investigation.

“There may be good arguments why the Post Office needs more funding. Maybe there are bad arguments. But those are policy disagreements,” Brnovich told The Daily Signal, adding:

We need to be really careful when we start trying to criminalize policy disagreements over how much X, Y, or Z agency should be funded. Think about the ridiculousness of what the left is doing. Does that mean when the left doesn’t want to fund our military, they are conspiring to kill U.S. service personnel? I think you get my point.

Hobbs’ office acknowledged a request for comment from The Daily Signal for this report, but did not respond in time for publication.

At last week’s Democratic National Convention, California Secretary of State Alex Padilla and Michigan Secretary of State Jocelyn Benson did a joint speech warning that the GOP sought to stop votes from being counted in November.

Padilla decried “attacks on our right to vote, including many that are targeting working families, young people, and communities of color.”

“Despite what he says, Donald Trump can’t cancel this election, but he and Republicans are making it too hard for so many to cast their ballots—and now he’s attacking vote-by-mail to distract and confuse voters,” Padilla said in the speech.

Trump had tweeted in late July about the potential problems of universal mail-in ballots, writing: “Delay the Election until people can properly, securely and safely vote???”

Ignoring the facts on the ground in most states, Michigan’s Benson chimed in to say “there is absolutely no difference between voting by mail and voting absentee.”

Actually, other election experts say numerous differences exist between universal mail-in voting and absentee voting—chief among them being that absentee voting involves a voter requesting a ballot with verification safeguards in place.

Under a universal mail-in system, elections offices automatically send out ballots to all registered voters but not always with verification of addresses, since many states don’t maintain voter registration rolls.

Whenever a government official asks for a criminal investigation without citing evidence, it’s a serious problem, Brnovich told The Daily Signal.

“That’s what they do in Third World countries, you criminalize your political differences,” he said. “So I think it’s important for us to make sure if we throw around serious charges that we have evidence and information to back those charges.”

The result of undermining elections could be worse than threatening the peaceful transition of power, the Arizona attorney general added.