What Precedent and the Constitution Say About Postponing an Election 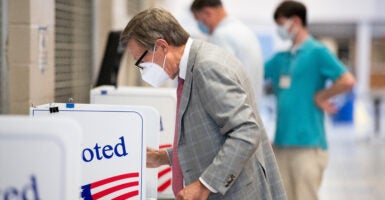 Voters cast ballots at a polling station at a high school in Columbia, South Carolina, on June 9. In a tweet on Thursday, President Donald Trump mused on the possibility of postponing the Nov. 3 election. (Photo: Sean Rayford/Getty Images)

If President Donald Trump’s goal was to get people talking about his latest tweet, he again succeeded after floating the idea of delaying the November elections.

If this was a serious political trial balloon, however, it’s unlikely to have any success.

Congress would have to pass, and the president would have to sign, any act that would delay an election for federal office, but Trump raised the idea in a tweet criticizing mail-in voting.

“With Universal Mail-In Voting (not Absentee Voting, which is good), 2020 will be the most INACCURATE & FRAUDULENT Election in history. It will be a great embarrassment to the USA. Delay the Election until people can properly, securely and safely vote???”

The “delay” comment might have significantly distracted from his point about the security risks of universal mail-in balloting, and how it is markedly different from more traditional absentee voting, which has far more safeguards in place.

Asked about the tweet at a Thursday evening White House news conference, Trump pointed to stories in both The Washington Post and The Wall Street Journal regarding problems with mail-in balloting.

“I don’t want to delay. I want to have the election, but I also don’t want to wait three months and then find out that the ballots are all missing and the election doesn’t mean anything,” the president said. “That’s what’s going to happen. That’s commonsense. Smart people know it. Stupid people may not know it. Some people don’t want to talk about, but they know it.”

Trump noted the difference between all-mail elections and absentee ballot voting. He noted that California is automatically sending out 28 million ballots.

House Speaker Nancy Pelosi, D-Calif., pounced on the tweet, asserting the power of the legislative branch.

Senate Majority Whip John Cornyn, R-Texas, reportedly said Trump’s reference to an election delay was a joke, “so all you guys in the press, your heads will explode and you’ll write about it.”

The Constitution doesn’t give the executive branch any unilateral authority to delay, reschedule, or change the federal election in November. Congress and the states have authority to make changes if there is a deemed emergency, said Hans von Spakovsky, a former commissioner with the Federal Election Commission and a former member of the Presidential Advisory Commission on Election Integrity.

“All it would take is legislation by Congress, signed into law by the president, to change the date of the federal election in November,” von Spakovsky, currently the manager of the Election Law Reform Initiative at The Heritage Foundation, told The Daily Signal. “I don’t think the general federal election has ever been delayed.”

States have considerable leeway in changing the dates of presidential primaries, as happened this year with the spread of the COVID-19 pandemic, von Spakovsky noted. He pointed to the states of Arizona, Florida, Illinois, Indiana, Michigan, Tennessee, Texas, and West Virginia as examples where governors can change the date of a primary election without approval from the legislature in the event of an emergency.

States can also determine how elections are administered, such as with mail-in balloting.

“The integrity, security, and accessibility of elections is a top priority for state and local election officials across the country,” Maria Benson, director of communications for the National Association of Secretaries of State, told The Daily Signal in a statement Thursday. “Americans should have confidence that our elections are fairly administered and well-secured, with built-in structural safeguards to ensure accurate results.”

Secretaries of state are the top election officials in most states.

Election officials of both parties are diligently working to respond to the current COVID-19 pandemic. Currently, some states vote primarily in-person while other states vote by mail, but all states already offer some form of absentee voting by mail for domestic voters, as well as for military and overseas citizens.

Election officials are weighing all contingencies to ensure elections this year are secure and accessible for all voters, including increasing absentee or mail-in voting and adjusting in-person voting as circumstances require and state laws permit.

All states have implemented a number of security measures in order to protect the integrity of the vote.

Even moderate Republican Sen. Lisa Murkowski of Alaska weighed in on the matter.

Judicial Watch President Tom Fitton didn’t advocate an election delay, but noted what he called the “hypocrisy” of the left, which has sought to create panic over the safety of in-person voting.

The Constitution doesn’t have express language about the authority to “postpone” an election for federal office, according to the Congressional Research Service, which issued an October 2004 report amid concerns about the possibility of a terrorist attack just three years after 9/11.

Using that authority, in 1845, Congress set a uniform date for electing members of Congress every two years and selecting presidential electors at the state level every four years for the first Tuesday after the first Monday of November.

“Specifically, there is no current constitutional authority residing in the President of the United States, nor the executive branch of Government, to postpone, cancel, or reschedule elections for federal office in the various States,” the 2004 Congressional Research Service report says.

However, the report didn’t entirely foreclose the possibility in case of an emergency, adding:

There might certainly be some potential emergency powers inherent in the President of the United States, as well as those delegated by statute, but there is no precedent for such powers being applied with respect to elections held in the various States for presidential electors, authority over which, as to the procedures and methods, has been expressly delegated in the Constitution to the States.

It is possible that some scenarios could be imagined, however, where attacks, disruptions, and destruction are so severe and so dangerous in certain localities, particularly in crowded urban areas, that the President under a rule of necessity may look to protect the public safety by federalizing state National Guard and restricting movement and activities in such areas, which would obviously affect the ability to conduct an election at those sites.

That said, journalist John Fund—who has documented election fraud for years for The Wall Street Journal, National Review, and other outlets—contended on Twitter that the pandemic doesn’t quite reach that historical threshold.

“The election is heading for chaos amid sudden huge bump in mail-in ballots,” Fund wrote in a tweet. “But Trump is way wrong to suggest a delayed election. We voted … for president during the Civil War. And during World War II.”

States are generally allowed to select an election date for a vacancy of a congressional office, and federal courts have upheld the authority of states to schedule special elections.

Congress could also delegate certain powers to the states and the executive branch for dates and other aspects of an election administration in case of an emergency, the Congressional Research Service report says.

This article was updated to include remarks from Trump’s Thursday press conference.