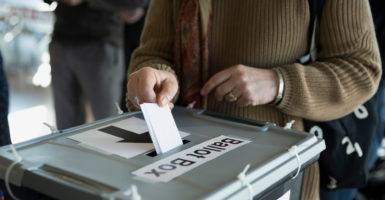 The North Carolina Board of Elections voted to hold new elections for the U.S. House and for two local offices after evidence of voter fraud. (Photo: Hero Images/Getty Images)

Widespread fraud by a political operative working for a Republican is forcing a redo of the 2018 midterm race for North Carolina’s 9th Congressional District.

The news confirms just how vulnerable our elections are to voter fraud, and how profound the consequences can be.

That should be the takeaway. Yet many on the left and in the media seem far more interested in spinning the situation for partisan gain than finding genuine solutions to the election insecurities that enabled this fraud in the first place.

They focus on the fact that this is “Republican” voter fraud, and accuse conservatives of “deafening” and hypocritical silence. They even refuse to call it “voter fraud” to avoid embarrassment after years of denying that voter fraud is a problem.

These claims debase the political process. They are cynical, politically motivated, and miss the point entirely. Election integrity is about much more than partisan politics—it is about preserving faith in the democratic process itself.

That’s why Heritage Foundation analysts were quick to condemn this instance of “Republican” voter fraud and called for an investigation, writing: “It is incumbent on conservatives and Republicans to resist the urge to circle the wagons or reflexively support the outcome in North Carolina as it stands today merely because of who won.”

While some on the left were busy arguing over whether to call it “election fraud” or “voter fraud,” we made no distinction: Securing elections isn’t a semantic game, it’s about taking voter fraud seriously, adopting election integrity reforms, and holding responsible parties accountable—regardless of their political persuasion.

That holds true in North Carolina, where four days of dramatic testimony—and the recent indictment of the operative in question, Leslie McCRae Dowless—made clear the 9th District race was tainted by deliberate, coordinated fraud.

The hearing by the State Board of Elections probed the nature of Republican candidate Mark Harris’ relationship with Dowless, the man at the center of an apparent absentee ballot fraud ring that intercepted, altered, or destroyed large numbers of ballots, and who had been retained by the Harris campaign in 2018. Harris has maintained he perceived no red flags about Dowless or his alleged illegal activities.

Yet Harris’ own son, John, warned him that Dowless had likely been involved in prior absentee ballot malfeasance. Indeed, the State Board of Elections had referred Dowless to federal prosecutors for alleged fraud in the 2016 election, but no action was taken at that time.

Absentee ballot collection by anyone other than a family member is a felony under North Carolina law, and this case clearly demonstrates why.

Harris should have heeded his son’s advice. In 2018, two counties targeted by Dowless—Bladen and Robeson—saw an abnormally high percentage of absentee ballots go unreturned. While 24 percent of ballots were not returned district-wide, that figure shot up to 40 percent in Bladen County and 64 percent in Robeson County.

Dowless’ stepdaughter, Lisa Britt, did testify, however, indicating that she filled out blank or incomplete ballots for Republicans.

Additional evidence collected by the board indicated that Dowless and his co-workers gathered unsealed and unwitnessed ballots directly from voters. Blank or incomplete ballots were then filled out in Dowless’ office, whereupon they were taken in small batches to the post office nearest to the voters’ addresses to avoid the typical warning signs that indicate a harvesting operation.

Ultimately, the Board of Elections unanimously voted to hold new elections for the U.S. House and for two local offices in Bladen County.

The Democratic governor of North Carolina thanked the board for overturning the election, saying that people need “confidence that their vote matters” and that “this action sends a strong message that election fraud must not be tolerated.” The state Democratic Party also stated that this attempt to “steal an election” undermines people’s faith in democracy.

It’s almost as though Democrats have been reading The Heritage Foundation’s website.

Unfortunately, if that is the case, they have missed one important point we make time and time again: Election integrity is a nonpartisan issue. The perpetrator’s politics should not dictate the level of our commitment to securing free and fair elections.

As proof of that, Heritage’s voter fraud database counts among its 1,177 proven instances of fraud, cases from people on both sides of the political aisle, including many cases of Republican-orchestrated voter fraud.

In 2000, for instance, a massive ballot-buying scheme was uncovered in Alabama involving the county sheriff and other municipal employees who rigged the Republican primary with bribes of cash, beer, and liquor.

In 2006, two Republican petition gatherers were sentenced to three years’ probation after it was discovered that more than 100 people who thought they were signing petitions to cure breast cancer and punish child molesters were instead registering as Republicans in an elaborate vote-flipping scheme.

And in 2013 and 2016, Toni Lee Newbill of Colorado voted in her deceased father’s name both in the general election and again in the Republican primary.

Heritage will now add the 2018 9th District midterm as an example of an election that had to be redone because of fraud. Any eventual criminal convictions will be added as well.

These cases make one thing clear: Some people on both sides of the aisle are plainly willing to exploit electoral vulnerabilities, or turn a blind eye to nefarious tactics, in order to win. In fact, Dowless himself has consulted for both Republicans and Democrats.

Whenever someone exploits electoral vulnerabilities, the integrity of the electoral process is compromised, and voters’ faith in the ballot box is undermined.

That’s why it is crucial for states to adopt election integrity measures, and in particular to address the vulnerabilities and other problems associated with absentee and mail-in voting.

Amazingly, the tactic which Dowless and his cronies used to commit their alleged crimes—known as ballot harvesting, or the practice of taking possession of someone else’s ballot—was just made legal in California.

It is difficult to take liberal activists seriously when the very activities they are outraged by on the one hand are being legalized and touted by liberal politicians on the other.

This incident also shows why prosecutors must take voter fraud allegations seriously, and investigate and prosecute them where warranted. Dowless’ activities were flagged to prosecutors in 2016, yet no action was apparently taken. Had it been, this entire incident may have been avoided.

Voter fraud requires effective bipartisan solutions, but first, we must candidly acknowledge that the problem exists—and not only when it is politically expedient to do so.

The Heritage Foundation has always and will continue to report on cases of voter fraud regardless of the political ideology of those who perpetrate it. One hopes that groups on the left will do the same.