Pennsylvania Agrees to Exhume Dead From Its Voter Rolls 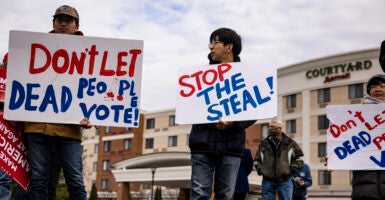 Pennsylvania will purge the names of thousands of deceased individuals from the state's voter rolls. Pictured: Supporters of then-President Donald Trump gather outside of a Gettysburg hotel prior to a Pennsylvania Senate Majority Policy Committee public hearing Nov. 25 on 2020 election issues and irregularities. (Photo: Samuel Corum/Getty Images)

Pennsylvania, one of the top battlegrounds of the 2020 election, has agreed to remove the names of about 21,000 dead people from voter registration rolls before the general elections this year.

The agreement was reached last week, according to the Public Interest Legal Foundation, an election-integrity watchdog group that first identified the names of 21,000 dead people who were still registered to vote a month before the 2020 election.

The organization provided Pennsylvania state officials with the names of 21,000 dead registrants who were not removed from the voting rolls after their deaths.

“This marks an important victory for the integrity of elections in Pennsylvania,” Public Interest Legal Foundation President J. Christian Adams said. “The commonwealth’s failure to remove deceased registrants created a vast opportunity for voter fraud and abuse. It is important to not have dead voters active on the rolls for five, 10, or even 20 years. This settlement fixes that.”

After a briefing between Pennsylvania state officials and the legal foundation, the state agreed to compare the state’s death data used by the foundation to compile its list with the state’s voter registration database, according to the legal group.

The Pennsylvania Secretary of State’s Office will provide the names of the individuals to county government officials and instruct the local officials to cancel the registrations.

To show compliance with the agreement, the Pennsylvania Secretary of State’s Office will provide progress reports on the number of dead names removed from the voter registration records to the Public Interest Legal Foundation on May 30, Aug. 31, and Nov. 30.

Pennsylvania will have races for one state Supreme Court seat, special elections to fill state legislative seats, and municipal races in 2021, according to Ballotpedia.

The Pennsylvania Secretary of State’s Office did not respond to email or phone inquiries from The Daily Signal on Wednesday.

In 2018, the report showed 127 dead people on the voter rolls were recorded as having voted in Pennsylvania. That’s 50 fewer than the 177 dead Pennsylvanians credited with voting in the 2016 election.

During the postelection litigation in 2020, President Donald Trump’s campaign and others accurately identified provable instances of votes being cast in the names of dead people who were still registered to vote. However, the Trump campaign inaccurately cited the names of several voters as dead who turned out to be still living.

Democratic challenger Joe Biden outpolled Trump by more than 80,000 votes in the state to capture Pennsylvania en route to winning the presidency.