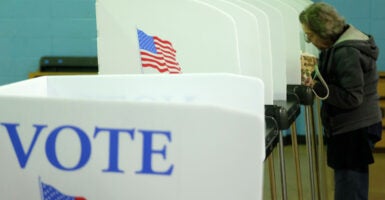 Democrat-aligned GPS Impact is “one of several partners” in Milwaukee's voter turnout initiative, according to the mayor’s office. Pictured: A voter fills out a primary election ballot Aug. 9 at Concord Community Center in Sullivan, Wisconsin. ((Photo: Alex Wroblewski/Getty Images)

Two dozen states banned the use of private money to finance election operations in response to Facebook CEO Mark Zuckerberg’s pouring part of his $400 million fortune into the 2020 election process.

Wisconsin wasn’t one of them.

A spokesman for Milwaukee Mayor Cavalier Johnson told The Daily Signal that GPS Impact is “one of several” partners in the initiative, which Johnson announced this week at a press conference.

“This is Zuckerbucks 2.0,” said state Rep. Janel Brandtjen, a Republican who chairs the Wisconsin State Assembly’s Campaigns and Elections Committee.

Republicans in both the Assembly and the state Senate are seeking documents showing communications between the city of Milwaukee and GPS Impact.

No lawmaker is alleging that Zuckerberg is funding Milwaukee’s get-out-the-vote program. Rather, “Zuckerbucks” or “Zuck Bucks” have become nicknames for private money that pays for local or state election operations.

A special counsel appointed by the Wisconsin State Assembly issued a report finding that jurisdictions getting Zuckerberg dollars may have conducted an illegal get-out-the-vote operation and violated other state laws.

The presidential election results in Wisconsin were among the closest in the country in 2020, with Joe Biden defeating Donald Trump by about 20,000 votes. However, Biden got 79% of the vote in Milwaukee.

Various nonprofit groups in 2020 orchestrated a “well-oiled machine of knowing what ballots are outstanding, who voted, who hasn’t voted” that allowed them “to do a real-time system of turning out the vote,” Brandtjen told The Daily Signal in a phone interview.

“When we heard that they were using this group, this GPS Impact, if you look at the website it clearly is not nonpartisan,” the Republican lawmaker said. “They work for Democrats and progressives to win in states, including Wisconsin. That’s a complete set of red flags.”

She also said it is improper for cities to be working to turn out voters.

“Municipalities are not supposed to be in the business of getting out the vote,” Brandtjen said. “Certainly, say [that] today is voting day and publicize that information. But to know which people have voted and not voted, that’s not the job of municipalities. That’s the job of political parties.”

GPS Impact’s Twitter account includes tweets touting Democrat politicians it works for at the federal and state level, and boasts of work more recently in helping to defeat a pro-life amendment to the Kansas Constitution.

GPS Impact should not be confused with the Washington-based opposition research group Fusion GPS that figured in the false Trump-Russia allegations. GPS Impact did not respond to phone and email inquiries from The Daily Signal for this report.

The Milwaukee Votes 2022 initiative began in May. But on Monday, the city’s mayor announced bigger plans for the program.

“We’re doing more, and I’m going to be embracing outreach and engagement through what we’re calling ‘Milwaukee Votes 2022,’” Johnson, a Democrat, said during the press conference. “As part of that, you will soon see a new website widget on many Milwaukee.gov website pages.”

The planned activity potentially is illegal, Assembly Speaker Robin Vos said in a joint statement with other Republican leaders.

And these Republicans aren’t standing for it. Their statement says:

We are demanding that the city of Milwaukee immediately cease assisting a privately funded, liberal group in their efforts to only engage with and turn out certain voters. The city of Milwaukee’s promotion and coordination of potentially illegal activities under the guise of canvassing is why Wisconsin voters have lost confidence in our elections. It is inappropriate for any municipality to support a get-out-the-vote campaign.

Jeff Fleming, the mayor’s spokesman, said in an email Wednesday  to The Daily Signal that the city of Milwaukee neither receives nor provides money to support the Milwaukee Votes 2022 initiative.

“All the work is nonpartisan; none of the efforts support individual candidates or causes,” Fleming said. “The mayor wants all eligible Milwaukee residents to cast ballots in upcoming elections. He supports democracy, and he wants voices in Milwaukee to be heard. The city works with any nonpartisan effort that encourages eligible voters to cast ballots.”

Fleming said he didn’t have specifics about the cost of the initiative or the funding sources, but elaborated that partners other than GPS Impact are involved. He noted that plans began in May.

“I do not have information about individuals, corporations, or foundations that are funding nonpartisan voter outreach,” Johnson’s spokesman said. “On May 24th, the mayor first announced this partnership—and that event was supported by the two largest business associations in the region, the Greater Milwaukee Committee and the Metropolitan Milwaukee Association of Commerce. Also at the event were a representative of the University of Wisconsin-Milwaukee, a group called ‘Souls to the Polls,’ and the League of Women Voters.”

In speaking to reporters, Johnson said the effort will involve going door to door.

“Milwaukee Votes 2022 will also have door-to-door canvassers that will be underway, funded by the private sector,” Johnson said. “Dozens of canvassers will be face to face with eligible voters, encouraging them to exercise their right to vote for the November election. I’m not asking anybody to cast their ballots for one party or another or one candidate or another.”

When asked about it by The Daily Signal, Fleming said: “I am not familiar with the specifics of the work of the door-to-door outreach, other than they are not paid by the city.”

A city-endorsed effort to go door to door to get out the vote is still concerning, Brandtjen said.

“There is no oversight of the going door-to-door that we know of,” the Republican state lawmaker said. “Can you imagine someone shows up from the city at your door to ask you if you’ve voted yet, or says, ‘I know you haven’t voted’? That could be perceived as massive intimidation.”

Dan O’Donnell, a conservative talk radio host in Milwaukee, says that the city referred his questions to a GPS Impact staffer. When he contacted the staffer, he said, she told him that she was only an informal adviser to the get-out-the-vote initiative.

“This doesn’t pass the smell test at all,” O’Donnell said in a phone interview with The Daily Signal.