South Dakota Bill Would Ban Abortion of Down Syndrome Babies 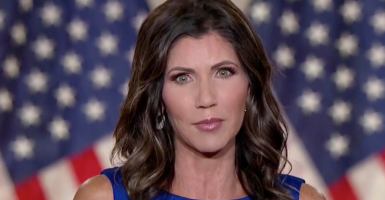 South Dakota Gov. Kristi Noem on Monday introduced state legislation that would ban abortions based on a fetal diagnosis of Down syndrome.

“I look forward to the day when the Supreme Court recognizes that all preborn children inherently possess a right to life,” said Noem, a Republican.

“The Declaration of Independence summarizes what we all know in our hearts to be true: God created each of us and endowed all of us with the right to life,” she said. “This is true for everyone, including those with an extra chromosome.”

Down syndrome is said to be the most frequently occurring chromosomal disorder and the leading cause of intellectual and developmental delay. Its cause is unknown.

“Every human being, regardless of their characteristics and capabilities, possesses inherent dignity and worth. Every unborn person, including those diagnosed with Down syndrome, is an irreplaceable gift. Gov. Noem is rightly working to protect these unborn boys and girls from lethal discrimination,” said Melanie Israel, a research associate in the DeVos Center for Religion and Civil Society at The Heritage Foundation.

There hasn’t been any serious opposition to the legislation, according to Ian Fury, communications director for Noem. Democrats in the state have mainly argued that the legislation may be “redundant,” he said.

According to an August 2017 report by CBS News, 67% of pregnancies in the United States in which prenatal tests detect Down syndrome are aborted.

South Dakota bans abortions after 22 weeks of gestation, and women seeking an abortion must wait 72 hours and seek guidance before undergoing the procedure.