Biden Vows to Cancel Oil and Gas Leases, but ‘Not Going to Ban Fracking’ 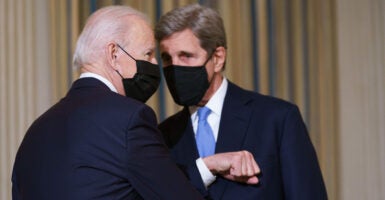 It was a strategic choice of words, since critics of Biden’s agenda to reverse human-produced climate change say it would kill huge numbers of U.S. jobs.

Biden previously announced his intention for the United States to rejoin the United Nations’ Paris climate agreement, which studies show could kill hundreds of thousands of jobs in the next five years and millions of American jobs by 2040.

His executive order establishing climate change as a national security priority calls for conserving 30% of federal lands by 2030 and canceling oil and gas leases on public lands. Biden stressed one thing that the order wouldn’t do.

“The executive order also directs the secretary of interior to stop issuing new oil and gas leases on public lands and in offshore waters wherever possible,” Biden said, adding: “Let me be clear, and I know this always comes up, we are not going to ban fracking. We’ll protect jobs and grow jobs.”

Biden said he will ask Congress to eliminate all federal subsidies to fossil fuel companies.

His other actions included a presidential memorandum to keep political interference out of climate science and a measure establishing the President’s Council of Advisors on Science and Technology, a panel to be chaired by Gina McCarthy, the Obama administration’s Environmental Protection Agency administrator.

In an appearance earlier in the White House briefing room, McCarthy told reporters that “good union jobs” would result.

Former Secretary of State John Kerry, Biden’s special envoy on climate matters, argued during the same briefing that Americans had been “fed a false narrative” by the Trump administration and conservative analysts that climate actions mean job losses.

“They’ve been fed the notion that somehow dealing with climate is coming at their expense,” Kerry said, as reported by the New York Post. “No, it’s not.”

Biden later said the country has “already waited too long to deal with this climate crisis,” arguing, “We can’t wait any longer.”

“It is an existential threat,” Biden said, later adding, “More Americans see and feel the devastation in big cities, small towns, coastlines, and in farmlands, in red states and in blue states.”

Conservative critics, including analysts at The Heritage Foundation, contend that progressives’ regulatory solutions to slow or halt climate change will do far more harm to livelihoods than long-term changes in global temperatures would.

But Biden drew a parallel between fighting climate change and COVID-19.

“It’s not just the pandemic that keeps people inside, it’s poor air quality,” Biden said. “Multiple studies have shown that air pollution is associated with an increased risk of death from COVID-19. Just like we need a unified national response to COVID-19, we desperately need a unified national response to the climate crisis, because there is a climate crisis.”

Biden said he would hold a climate summit of world leaders on April 22, which is Earth Day.

He said he didn’t want to forget American workers in the fossil fuel industry, but to put them to work in green industries.

“We are never going to forget the men and women who dug the coal and built the nation. We are going to do right by them,” Biden said. “Make sure they have opportunities to keep building a nation in their own communities and getting paid well for it.”