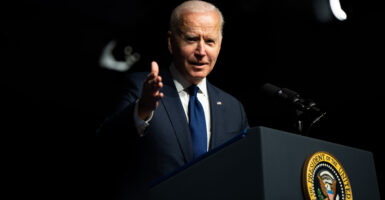 “We’re finally now getting to the point where we’re going to be addressing the original sin of this country, 400 years old,” candidate Joe Biden told Wisconsin voters in September 2020, “slavery and all the vestiges of it.”

On his first day in office, President Biden signed an executive order that cited “the Civil War and the abolition of slavery.” A presidential proclamation in March decried “the damaging legacy of slavery,” while another, on June 1, lamented the “unconscionable hardships of slavery.”

Too bad he facilitates the slavery of 2021.

“Biden’s open-border policies have produced the largest human-trafficking operation since the international slave trade,” Rep. Tom McClintock, R-Calif., told me. “To the extent that immigrants are forced to labor as indentured servants to the crime cartels, these policies have reintroduced slavery into the United States.”

During a June 10 House Judiciary Committee hearing, McClintock asked FBI Director Christopher Wray, “So we basically, 170-plus years after the 13th Amendment, have slavery burgeoning in this country as a result of these policies?”

The 13th Amendment to the Constitution was adopted in 1865. This provision drove the final stake into the heart of human bondage in America: “Neither slavery nor involuntary servitude, except as a punishment for crime whereof the party shall have been duly convicted, shall exist within the United States, or any place subject to their jurisdiction.”

Today, 156 years after that language entered the Constitution, it’s being trampled beneath a flow of humanity that resembles traffic on the northbound San Diego Freeway.

From Jan. 1-May 31, Customs and Border Protection reports 711,567 land encounters with illegal aliens on the U.S.-Mexico border versus 148,075 during 2020’s like period—up 380.5%. Not all of these are modern-day slaves. But those who are can be hidden easily, out in the open, amid such congestion.

“We have what can be described as modern-day slavery,” said Ira Mehlman, spokesman for the Federation for American Immigration Reform. “Human traffickers (as opposed to smugglers) lure unsuspecting migrants with promises of all sorts of opportunity in the U.S., and then hold them hostage once they arrive here with threats of violence against them, or family members back home. Often people who are trafficked are forced to work in the sex trades.”

“Since many do not have the cash up front, they are required to work it off once here,” Mehlman explained. “Not unlike the Mafia, that can entail some significant accrual of interest, thereby extending the period of servitude.”

W. Kurt Hauser is a distinguished overseer with the Hoover Institution on war, revolution, and peace at Stanford University. He also knows slavery when he sees it. He is the author of “Invisible Slaves, The Victims and Perpetrators of Modern Day Slavery.”

“The huge increase in illegal immigration caused by the rescission of prior immigration practices, policies, and laws by the Biden Administration, and the violation of human rights that has accompanied many of these immigrants—including coercion, violence, rape, debts, and payments would qualify as human trafficking,” Hauser said. “That is slavery.”

Jessica Vaughan of the Center for Immigration Studies is appalled at the giant shrug with which today’s federal government greets these burgeoning atrocities.

“The Biden-Harris administration refuses to acknowledge that they are enabling this entirely predictable criminal and exploitive result of their policies,” Vaughan said. “They prefer to see themselves as saviors of the migrants, even if their policies are literally enslaving some of the migrants to the cartels and smugglers. If there are some horrible crimes that happen, well they ‘fix’ them by awarding the victims with a U or T visa, and their conscience is laundered.”