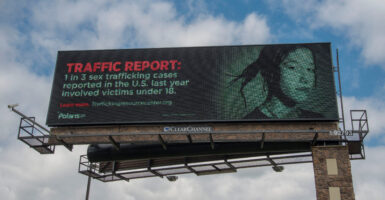 A billboard sponsored by the National Human Trafficking Resource Center, a national hotline serving victims and survivors of human trafficking, calls attention to the problem, which is likely to worsen with the surge in illegal immigration. (Photo: Education Images/ Universal Images Group/Getty Images)

Eric Schmitt is the attorney general of Missouri.

One of my top priorities as state attorney general of Missouri has been to combat human trafficking.

We have organized a number of operations to fight human trafficking with an unprecedented level of coordination among local, state, and federal law enforcement that have rescued victims and led to the arrest of traffickers.

Further, through our “Hope Initiative,” we have had major success in shutting down illicit massage businesses. We are even being asked to train other states on the “Missouri Way” of rooting out human trafficking.

However, President Joe Biden’s border crisis is causing new human trafficking problems for our state and the nation.

While those of us in Missouri have taken two steps forward in the fight by working tirelessly to combat this modern-day slavery, the Biden administration’s policies are taking us one step back.

Biden’s decision to reverse policies that secured our southern border has empowered those who engage in human and drug trafficking, saddling our country with a full-scale humanitarian crisis.

That’s what happens when you spend years advocating a porous border and amnesty, while simultaneously issuing executive orders that encourage border crossing.

The crisis at the border was 100% avoidable and, frankly, it’s a total disaster. That’s why I have filed suit against the Biden administration to reinstate commonsense protocols enacted by former President Donald Trump—protocols that combat migrant trafficking, secure the border, and would work to end the border crisis.

On his first day in office, Biden’s administration suspended the Migrant Protection Protocols. Those protocols prevented illegal aliens traveling through Mexico from countries such as Guatemala or Nicaragua and from “gaming” the system when they showed up at our border.

Instead of being released, under the Migrant Protection Protocols, eligible aliens seeking asylum are issued a notice to appear and then transferred to Mexico while awaiting their proceedings. They are then directed to return at a port of entry on the day of their immigration proceedings.

Through the Migrant Protection Protocols, we remove the key incentive for migrants to leave their home country and embark on a dangerous journey.

They know they won’t be released into the United States, and the cartel’s human-smuggling operation takes a major blow because migrants won’t want to wait in Mexico.

Now, through Biden’s catch-and-release protocols, migrants arrive at our border, claim asylum, receive a notice to appear, and are released into the United States.

Some 38% of those claiming asylum never appear for their court date and disappear into the country, and a whopping 91% of those who do show up for court are found ineligible for asylum.

Releasing migrants into the U.S. on nothing but a promise that they appear in court years from now rewards them for breaking the law and gives them exactly what they want.

Mexican drug cartels have now noticed those lax policies and are abusing them to their advantage.

Notorious drug gangs are seizing upon Biden’s reversal of the Migrant Protection Protocols and are ratcheting up their human-trafficking operations in response. Gangs promise migrants that after making the “easy” journey and claiming asylum, the United States will allow them to stay for up to three years because of the immigration case backlog.

The journey is never easy and is a cash cow for the cartels.

As a former U.S. marshal in El Paso, Texas, explained, “Mexican drug cartels are taking advantage of the recent influx of migrants, using it as an opportunity to make money” because “it’s more cost-effective to be involved in human smuggling than it is to be in drug trafficking.”

The National Human Trafficking Hotline reported that between 9% and 12% of calls made to the hotline for the state of Missouri involved foreign nationals and, according to experts, that’s just the “tip of the iceberg.”

Without commonsense immigration reforms and control mechanisms, such as the Migrant Protection Protocols, human trafficking will only be exacerbated in Missouri and elsewhere.

The stakes are high, and Missouri will continue to lead the fight in combating human trafficking. By filing suit against the Biden administration, we are seeking a reversal of his decision to halt the Migrant Protection Protocols, to greatly reduce the influx of illegal immigrants, and to quell the crisis at the border.

Despite Washington’s failure to act, here in Missouri, we will continue to hold the line and root out crime while seeking justice for victims.

As the state’s attorney general, my greatest responsibility is to protect Missourians and their families. We must demand an end to human trafficking at the border, in Missouri, and across the country.

You can join our fight and report cases of human trafficking. If you see something suspicious, call the National Human Trafficking Hotline toll-free at 1-888-373-7888. For more information, visit makemofree.com.