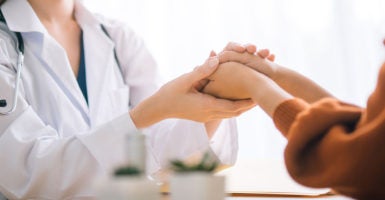 With proper training, advocates for victims say, medical professionals could be a valuable asset in the fight against human trafficking. (Photo: Saksit Kuson and EyeEm/ Getty Images)

An estimated 40 million people are trafficked around the world each year, says the leader of a group training health care providers to help identify and rescue victims.

One research study of survivors in 2014 found that “88% of victims seek medical care and treatment while being trafficked,” said Deb O’Hara-Rusckowski, a critical care nurse who co-founded Global Strategic Operatives, an organization that combats human trafficking.

“Other studies confirm it to be 80[%] to 90%, hence our reason to focus on the health care sector,” O’Hara-Rusckowski said. “Health care has a great opportunity to identify and provide these victims with a path to freedom.”

The first study she cited, by Laura Lederer and Christopher Wetzel, was published in the Loyola University Chicago School of Law’s Journal of Health Law.

Human trafficking comes in many different forms, and the mission of O’Hara-Rusckowski’s group is to eradicate all of those, including sexual exploitation, forced labor, and organ harvesting, by equipping the health care sector with the tools to stop such trafficking as it identifies victims.

Most human trafficking victims seek medical attention, she said, but they largely go undetected because of misperceptions by medical professionals about how to identify them and because of a lack of training on the proper action to take.

The pilot program is intended to educate health care workers on how to identify signs of trafficking and to take action on victims’ behalf, O’Hara-Rusckowski said at a Jan. 30 press conference in Washington.

Health care professionals from six health care systems around the country gathered to discuss the launch of the pilot program, along with leaders from Global Strategic Operatives and Selah Way.

Those represented included Baptist Health in Florida; Advocate Aurora Health in Illinois; RWJ Barnabas Health and Hackensack Meridian Health, both in New Jersey; Northwell Health in New York; and Harris Health System and Baylor College of Medicine, both in Texas.

At least one medical professional from each spoke at the event regarding progress in training.

“I know you’re not surprised we have identified a staggering number of victims who, without this effort, would have in fact remained high risk,” said Dr. David Battinelli, chief medical officer and senior vice president of Northwell Health.

Four of the sites have completed initial training, and the other two plan to complete training by the end of March. Global Strategic Operatives began training leaders of the organizations with the intention that they in turn would train other team members.

By the end of January, O’Hara-Rusckowski said, 1,368 people had been trained to detect and act on human trafficking victims and another 240,000 were to receive the training at the six participating health care systems.  After that, she said, she hopes to expand the initiative throughout the country.

Elizabeth Melendez Fisher Good, founder and CEO of Selah Way and an advisory board member for Global Strategic Operatives, outlined her organization’s contribution to drafting bipartisan legislation. The proposed Human Trafficking and Exploitation Prevention Training Act (HB 4388) would amend the Public Health Service Act to provide training to elementary- and secondary-school faculty to recognize the signs of human trafficking in children.

The keynote speaker, Rep. Chris Smith, R-N.J., discussed his involvement in the movement to end human trafficking and legislation he has authored to combat it.

“Human trafficking is a barbaric human rights abuse that thrives on greed, secrecy, a perverted sense of entitlement to exploit the vulnerable, and an unimaginable disregard for the victims,” Smith said.

Another issue, especially for victims of sex trafficking, is how to heal and start a new life once escaping it.

Some laws prevent victims from moving on, said Rep. Ross Spano, R-Fla., who first was elected to the House in 2018. These obstacles include laws that keep criminal convictions for prostitution on the records of victims.

In his first year in the Florida Legislature, Spano said, he authored and won passage of a bill to expunge such convictions if victims can prove they acted under duress and coercion.

“We were able to get that passed the first year, and now we’ve literally had hundreds and hundreds of victims in Florida who have in fact turned the page and moved beyond that victimization,” Spano said.