Will Biden Place Political Correctness Ahead of Military Readiness on Transgender Policy? 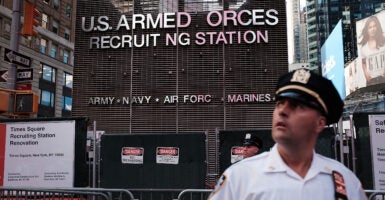 At his Tuesday confirmation hearing, President Joe Biden’s nominee to be secretary of defense, retired Gen. Lloyd Austin, asked about service by transgendered people in the military, replied that if “you are fit, and you’re qualified to serve, and you can maintain the standards, you should be allowed to serve.”

That is indeed the correct answer—but apparently not the path Biden intends to pursue. On Wednesday, new White House press secretary Jen Psaki announced that Biden intends to reverse existing military transgender policy “in the coming days and weeks.”

The existing policy—that of former President Donald Trump and then-Defense Secretary James Mattis—allowed transgender individuals to serve, provided they did not suffer from a condition called gender dysphoria.

Despite being widely referred to as a “transgender ban,” the policy provided more leniency and opportunity than policy that had been in effect for decades prior to 2017.

Biden’s apparent intent to discard that policy would ignore the important distinction between those transgender individuals who suffer from gender dysphoria and those who don’t.

Gender dysphoria is a medically recognized psychological condition that results from an incongruence between one’s sex assigned at birth and one’s gender identity.

In late 2017, Mattis began a six-month study to identify the best policy for the Department of Defense with regard to service by transgender individuals.

In the course of that review, he found Department of Defense clinical and U.S. survey data that reflected individuals with gender dysphoria attempt suicide at rates between eight and 10 times the average for individuals not suffering from gender dysphoria.

For that reason, Mattis enacted a nuanced policy that allowed service by transgender individuals free from gender dysphoria—giving the lie to those who refer to the current policy as a “ban.”

However, he deemed individuals suffering from gender dysphoria to be ineligible for military service, joining a list of other medically disqualifying conditions, such as asthma, severe depression, or anxiety.

The policy struck the best possible compromise permitting those who—as Austin described—are “fit and qualified” to serve their country while preventing service by those for whom military service presents a clear risk.

News that Biden intends to quickly overturn existing policy ignores those important considerations and instead prioritizes campaign promises made to the trans community over the need to maintain a strong and ready military.

America’s military is already under pressure to do more with less. The last couple of years have witnessed military budgets that do not keep up with inflation. The services are smaller than their leaders say they need to be, while our adversaries are increasing their capabilities at an alarming pace.

The military counts on having a commander in chief who will have its back and support policies that will make it more, not less, capable. If this change is implemented by Biden, it will be an early sign he values political correctness above military readiness.