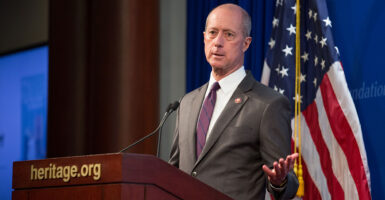 “We should never forget that the top goal of Russia and other adversaries is to divide us, to sow dissension,” Rep. Mac Thornberry, R-Texas, ranking member of the House Armed Services Committee, says Tuesday in remarks about the 2021 Index of U.S. Military Strength. (Photo: Willis Bretz for The Heritage Foundation)

The military strength of the United States again is rated as only “marginal” in a new report from The Heritage Foundation, a status that a key Texas congressman says doesn’t serve the American people well.

“The fundamental point here is that we’re not where we should be,”  Rep. Mac Thornberry, R-Texas, ranking member of the House Armed Services Committee, said of the 2021 Index of U.S. Military Strength during an event Tuesday marking its release at the think tank’s Capitol Hill headquarters.

“Or to put it another way, the federal government is not fulfilling its first responsibility to the American people and to future generations to provide for the common defense,” Thornberry said at the event, which was streamed online.

It’s not all bad news, he said, but there’s still a ways to go.

“We’ve definitely made up some ground recently on [military] readiness, but there are still some significant gaps,” Thornberry said of the Defense Department, adding:

We have accelerated our development of essential technologies and the applications of them, but we’re not yet outpacing our adversaries the way we should. While Congress has given the department new tools and authorities and in some instances they are being used to greater effect, there’s still too much resistance to change both in the department and within Congress.

With regard to the marginal rating of U.S. military readiness, the third year in a row Heritage has ranked all branches as marginal, the index’s executive summary points out both positive and negative indicators.

The executive summary of the annual Index of U.S. Military Strength, which was first released in 2015, rates as “marginal” the strength of the Army, Navy, Air Force, and Marine Corps. It adds that the Navy trends toward “weak.”

The 2020 Index of Military Strength also rated the armed forces’ overall strength as marginal, as did the 2019 index, in which the Marines were rated as “weak.”

The index has yet to assess the strength of the Space Force, established last December by the Trump administration.

“So when we talk about the ‘marginal’ U.S. military, it’s comparing that military against what the total requirement is,” said Wood, senior research fellow in Heritage’s Center for National Defense at the Davis Institute for National Security and Foreign Policy. “Where do you want to be in the world? What kind of posture do you want to have?”

The index identifies negative trends as “force readiness, declining strength in key areas like trained pilots, and continued uncertainty across the defense budget.”

It says positive trends include “progress in bringing some new equipment into the force, filling gaps in manpower, and rebuilding stocks of munitions and repair parts.”

Although the index maintains that the nation’s current military could handle a major regional conflict while keeping a presence and maintaining engagement elsewhere, it says that force “would be very hard-pressed to do more and certainly would be ill-equipped to handle two nearly simultaneous MRCs [major regional conflicts], a situation made more difficult by the generally weak condition of key military allies.”

The new index identifies Russia as the main threat to the U.S., but says China is “the most comprehensive threat that the U.S. faces, [and] continues to modernize and expand its military and pay particular attention to its space, cyber, and artificial intelligence capabilities.”

The index classifies Iran as the biggest security challenge because of its support of terrorist organizations such as Hezbollah and its hate not only of the U.S. but Israel, the nation’s strongest ally.

It’s important to keep in mind the significant threats of countries such as Russia, Thornberry said.

“We should never forget that the top goal of Russia and other adversaries is to divide us, to sow dissension,” the Texas Republican said. “I don’t worry about our ability to overcome any outside adversary. The only thing that keeps me up at night are the decisions we make for ourselves.”

Marking Thornberry’s pending retirement from Congress when his 13th term ends in January, Heritage presented him with the think tank’s first Guardians of the Gate award for his service in advancing pro-military policy.

Thomas Spoehr, a retired Army lieutenant general who directs the Center for National Defense, issued a joint statement with Wood saying the 2021 Index of Military Strength provides a clear vision for what needs to be done:

Most Americans can agree—the U.S. government’s top priority should be to provide for the common defense through fully funding a military capable of successfully confronting and defeating America’s enemies. However, while our adversaries have spent the past two decades investing in their forces and taking advantage of rapidly advancing technologies, America has been forced to choose between solving a crippling readiness crisis and investing in modernizing the force to compete in the future.

We can no longer settle for one or the other—we must do both. The Index provides clear data from which to start—it simply remains for our leaders to show the political will and necessary courage to ensure America never truly loses its status as the world’s foremost military power.

We hope to never have to use such a force, but history is quite clear—when our military is mighty, our enemies are far less likely to engage in belligerent action against us or our allies. Investing in a strong military today paves the way for peace in the years to come.