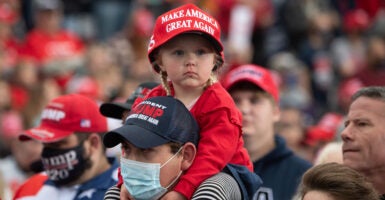 A child wearing a MAGA hat surveys the crowd as President Donald Trump speaks during a Make America Great Again campaign rally in Martinsburg, Pa., on Oct. 26. A California man was sentenced this week to four years in prison for assaulting a Trump supporter wearing a similar cap. (Photo: Saul Loeb/Agence France-Presse/Getty Images)

Los Angeles County District Attorney’s Office announced Delgado “pleaded no contest” to one felony count of “assault by means of force likely to produce great bodily injury,” according to a March 4 press release.

“The suspect continued to punch the victim, and then stole the victim’s hat and fled,” Higgins said, according to the Los Angeles Daily News.

The victim in the hat received serious injuries, prosecutors said. Delgado was arrested approximately a month after the incident at his home, the Los Angeles Daily News reported.

A superior court commissioner earlier ordered Delgado to enroll in Alcoholics Anonymous and anger management counseling every week until he was sentenced, the Los Angeles Daily News reported.