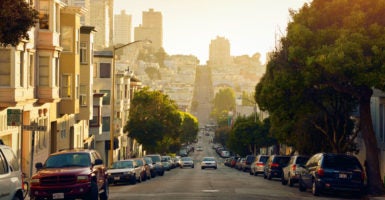 The state of California sued the Department of Justice Wednesday to force the release of records relating to Attorney General Jeff Sessions’ order to withhold funding from so-called sanctuary states.

California is one of several sanctuary jurisdictions—but the first state—to file a lawsuit relating to Sessions’ order to tie federal grants to immigration compliance. The lawsuit demands that the DOJ provide all records relating to the new eligibility requirements. Once obtained, California hopes the records will prove the DOJ didn’t consider the damage the requirements may cause, Courthouse News reported Wednesday.

“The State is concerned that [the Office of Justice Programs] did not consider the harm that compliance with these conditions may cause to some state and local jurisdictions that have determined such policies would undermine trust and cooperation between law enforcement and their residents, and therefore, public safety in their jurisdictions,” the lawsuit reads.

Chicago filed a lawsuit this fall directly challenging those requirements, claiming that Sessions had overstepped his authority. A U.S. district judge agreed in September, striking two of them down and triggering an appeal from the DOJ. In December, the National Sheriffs’ Association backed the DOJ’s appeal, claiming the favorable ruling for Chicago should not have a national impact.

“The problem we have is not so much about sanctuary cities,” National Sheriffs’ Association Executive Director and CEO Jonathan Thompson told The Daily Caller News Foundation. “It’s that the political actions of one jurisdiction should never affect thousands of other counties. That’s what’s happening here and we find that objectionable.”

The DOJ has $385 million in grants, much of which remains locked up until the appeals process is complete.