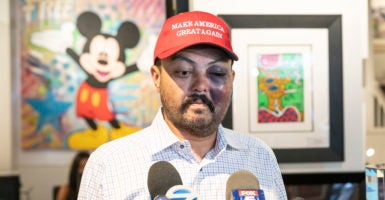 Jahangir "John" Turan speaks with reporters Thursday after he says he was beaten by about 15 teenagers for wearing a "Make America Great Again" hat on a New York City street. (Photo: LightRocket/Getty Images)

A New York City man says he was beaten by a group of teenagers in Manhattan for wearing a “Make America Great Again” hat.

Jahangir “John” Turan, an art gallery owner, purchased a MAGA hat Tuesday after visiting Trump Tower, Fox 5 reported. Turan told reporters Thursday that he was attacked by a group of about 15 “kids” on Canal Street, one of whom smashed Turan’s head into a scaffold.

The kids yelled, “F— Trump,” he said, and began to stomp on him before slamming his head into the scaffold. Turan has a fractured cheek and has a swollen eye, and he is checking to see if there may be permanent damage to his eyesight.

Turan is a supporter of President Donald Trump and told reporters that “it’s sad” a hat would cause someone to beat him up, according to Fox 5.

“I love President Trump,” Turan said, according to the station. “I think he’s doing a great job. It’s sad to get beat up for wearing this hat. This is America.”

Turan held a press conference Thursday to ask that the New York Police Department find those who attacked him.

There have been past reports of people being harassed and beaten up for wearing a MAGA hat. A Hispanic woman said she was nearly assaulted by someone who took offense to the hat in April. A legal American citizen from Togo alleged that he was attacked, also in April, for sporting the gear.