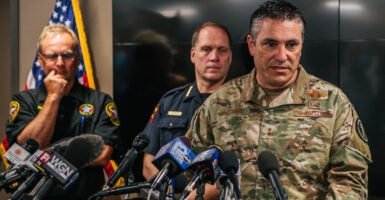 >>> Update: No charges will be brought against police officers or Blake in the Aug. 23 shooting, Kenosha County District Attorney Michael Graveley announced Tuesday. <<<

Blake was shot seven times Aug. 23 by an officer after fighting with police and not responding to being tased.

“We are continuing to work with our local partners in the Kenosha area to ensure they have the state support they need, just as we have in the past,” Wisconsin Gov. Tony Evers, a Democrat, said in a public statement.

“Our members of the National Guard will be on hand to support local first responders, ensure Kenoshans are able to assemble safely, and to protect critical infrastructure as necessary,” Evers added.

Guardsmen will protect infrastructure and necessary community cultural institutions, and aid first responders such as the fire department, Evers said. The National Guard will not be used to disrupt peaceful demonstrations or to block the media from reporting on the scene, the governor said.

“We work hand-in-hand with communities across Wisconsin to help ensure public safety, and this mobilization represents the culmination of months of planning and partnership with Kenosha,” Maj. Gen. Paul Knapp, adjutant general of the Wisconsin National Guard, said in a formal statement.

“We are citizen soldiers and airmen who live and work in the same communities as the citizens we serve, and we are always there for our neighbors when they need us,” Knapp said.

Blake was paralyzed from the waist down because of the shooting. The incident led to riots and demonstrations in Kenosha.

Evers did not respond to The Daily Caller News Foundation’s request for comment.