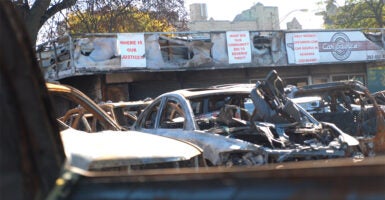 The Daily Signal’s three-minute video, released late Wednesday, highlights some of the destruction wrought by rioters on the nights of Aug. 23 and 24.

Twitter’s “sensitive material” warning does not remove the content from the platform, but does make the material harder to access by requiring users to click on the “view” button on the warning label.

Twitter users, and not the platform itself, usually flag tweets they say includes sensitive content. This is sometimes a “coordinated effort by trolls on the left” who report tweets as a means to suppress content they don’t agree with, Lyndsey Fifield, The Heritage Foundation’s social media manager, said.

The label is a “good tool for users when material is actually sensitive, but it’s obviously being abused and Twitter should crack down on users who participate in this kind of abuse,” Fifield said.

The Daily Signal’s video features images of Car Source, a Kenosha car dealership torched by rioters; B&L Office Furniture, which was leveled by arson; and parts of the Uptown neighborhood where much of the violence occurred.

The video recalls that riots erupted in Kenosha following a white police officer’s shooting of a black man.

A police officer in Kenosha, Wisconsin, shot 29-year-old Jacob Blake in the back seven times on Aug. 23. Police said Blake, who is black, resisted officers during a call for a domestic dispute and reached inside his sport utility vehicle before the officer fired.

Blake, who was wanted on a warrant for third-degree sexual assault, is now paralyzed from the waist down. A video of the shooting quickly spread through social media and sparked two nights of riots and arson in Kenosha.

Twitter notified The Daily Signal late Friday that it had removed the “sensitive material” warning from the video.